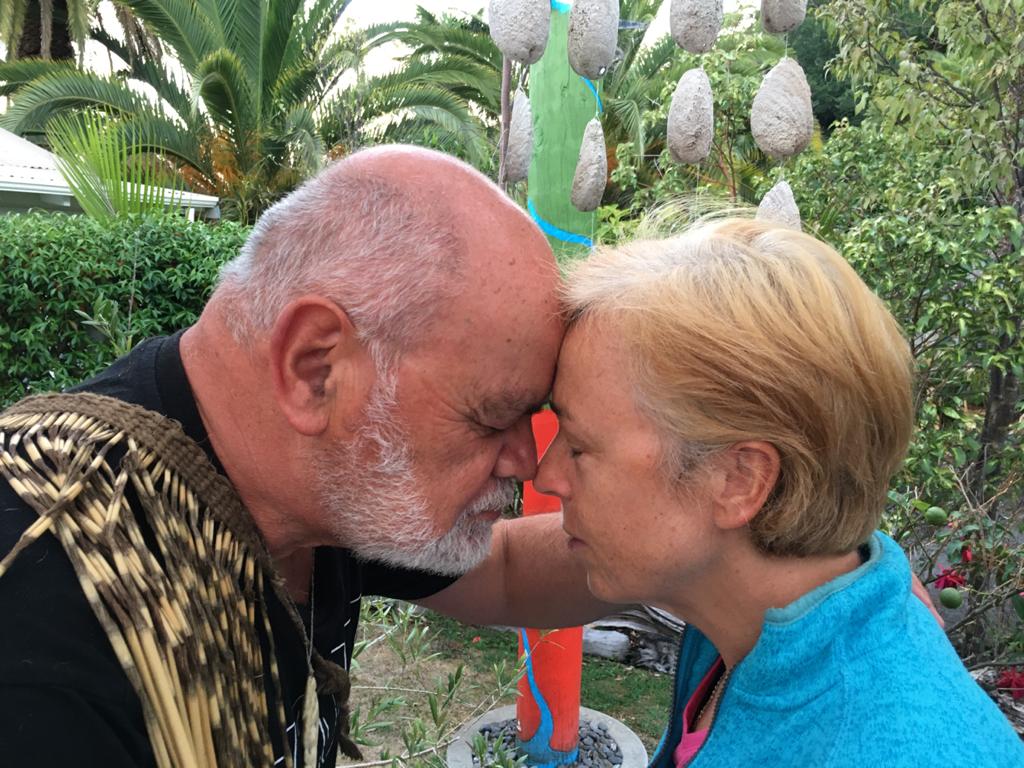 This morning wasn’t exactly my best bit of navigating – or even cycling – as we left Wellington on yet another damp grey morning.  As well as a busy capital city, Wellington is hilly ….as you can see from this photo which we took from a lookout point near Andrew and Sally’s last night…….

…..taking advantage of the one time the sun came out in our four days here.  Apart from one evening it rained the entire time we were there, making us feel very much like we were at home!

So getting out of the city on a busy weekday morning wasn’t exactly easy.  I was also using a new App on my phone so had to keep stopping to get it out of my barbag to check where we were. A couple of times that was at the bottom of a hill so I struggled to get started again and the fact that that for some unknown reason I felt a bit nervous on the bike.  We have been told that North Island is a lot busier with traffic because most of the population live here, so I guess I was starting out with some trepidation and it showed.  So it was slow progress.  But we eventually made it out of the city onto a lovely path along the Kapati Coast…..

…..and had our first break of the day on Plimmerton Beach….

After lunch the route took us through Queen Elizabeth Park – completely away from traffic through a lovely park with some great mountain views for about 8km.

We didn’t seem to be making much progress in terms of kilometres until we joined the Old State Highway for a more direct route, but it did mean traffic got busier although we mostly had a shoulder to cycle on.  But it was the last 25km of the day that was the toughest. A very busy Highway 1 in the late afternoon, which was narrow in places so it was full on concentration.  But the sun had come out at this stage and there was no wind so it could have been a lot more unpleasant.

We made it to our campsite on the edge of Tararua Forest Park around 5pm and it’s probably one of the nicest free campsites we have been to so far.  Clean toilets, soft grass so it was easy to pitch the tent and in the absence of shower facilities there was a lovely stream where we could take a dip….bit nippy but very refreshing after a hot sweaty afternoon!

And there weren’t many other people there so we picked a lovely spot and spread ourselves out nicely to relax for the evening.

Although we didn’t see them until much later the stars were absolutely amazing – probably the most spectacular of our trip.  Definitely one of our best camping experiences!

A relatively lazy get-up with tea and coffee made with fresh stream water, but we were still on the road for 8.15am mentally prepared for a day of highway cycling.  We don’t mind busy roads to be honest as long as there is a hard shoulder for us us cycle on and today we got lucky. We had one for the entire day which was a relief considering how busy the roads were and the speed of the traffic.  And similar to yesterday afternoon the scenery on both sides of the highway was quite interesting, but as the road was busy we couldn’t completely relax and look around us.  Our morning break was in a place called Foxton, which has a special museum dedicated to the history of Dutch immigration to New Zealand, considering it was discovered by Dutchman Abel Tasman.  In sticking with the Dutch theme there is a working flour mill, which we definitely didn’t expect to see in the heart of New Zealand….

Not much to report on our journey after that as it was functional cycling to get to our campsite at Dudding Lake and for the last 20km we had a strong wind in our faces, so strong at times that I could hardly see through streaming eyes despite wearing sunglasses. We did however cycle through a town called Bulls, which is “a town like no udder” apparently…..!

Arrived around 3pm to a very windy campsite where most pitches were pretty exposed, but we managed to find some shelter behind a hedge and got ourselves set up.  Before dinner we decided to check the weather forecast and found that rain was forecast overnight and tomorrow morning so we decided to check if the one onsite cabin was available…we aren’t exactly sure how waterproof our tent still is, so we didn’t want to take the chance! Initially the owner said it was booked but obviously felt sorry for us on bikes as he clarified that the booking was for early tomorrow.  So he was happy to give it to us on the proviso thar we would be out by 8.30 ….and for less than it cost to camp in Picton last week! Twenty minutes later we had packed up and resettled ourselves on our little balcony overlooking the lake and out of the warm but very strong wind.

We woke a few times in the night to hear the rain hammering on the roof of our cabin so we had definitely done the right thing in deciding not to camp.  The rain was still heavy when we got up n the morning and as we didn’t have far to travel today so took advantage of the camp kitchen and hung around there until around 11am.  We seemed to have timed it right because we only had one drizzle shower before we got to Whanganui a couple of hours later.

We were staying with Couchsurfing hosts Rob and George who wouldn’t be home until after 2pm so we had lunch by the river and then found a coffee shop in town for post-lunch cakes.

Rob is of Maori origin, so had told us he would like to give us an informal Maori welcome, called a ‘whakatau’, which he does for all new guests. As visitors who have never been welcomed to the land in this way, our feet are considered sacred, so the purpose of the ceremony is to remove this sacredness and become one with the people who live there.  All we knew is that George would meet us when we arrived and our participation would involve Nigel telling our story and me singing a song (known as a ‘waiata’) to enhance that story, as it is customary that women do not speak but sing. When we turned the corner of the street we were greeted by the sight of the Irish flag flying at full mast.  George greeted us at the side of the house while Rob sat silently on the porch.  George then led us in and as is Maori tradition, Nigel as my husband walked behind me to protect me from the back.  When we were directed to our seats he then sat slightly in front of me as my protector from the people we didn’t yet know…Rob and George.  Rob then proceeded with the ceremony, which would transition us from strangers to friends – welcoming us into their land but more specifically their home and a blessing to keep us safe.  It was all in Maori, which he later translated.  Next, George told his story and sang his waiata and then it was Nigel’s turn to talk about us, who we were and how we had come to be here. The female is considered the bird of the forest so I had to sing a song that helped enhance our story, so the one I had chosen (and practiced singing on the bike in the way there!) was the theme from  The Littlest Hobo, which felt the most appropriate.  The final part was exchanging a hongi (nose) hariru (handshake) with both Rob and George – the pressing of noses and foreheads to symbolise a show of unity and the handshake is a gesture of friendship.

Then we were taken into the house for some food. Definitely a welcome with a difference and it had a very spiritual feelto it.  The rest of the evening was spent chatting like we had all known each other for a long time over a fabulous dinner cooked by George. What a fantastic experience!

Started the day with a hearty cooked breakfast …..

…..before being taken on a guided trip of Whanganui. From what we saw of the city yesterday we had already decided we quite liked it with its turn-of-the-century colonial buildings interspersed with Art Deco buildings. It has a population of 46,000 and lies on the Whanganui River, which is New Zealand’s third-largest river and one which has a special status to the Maori people.  In 2017  it became the world’s first economic natural resource to be given its own legal identity, with the rights, duties and liabilities of a legal person.

First up was a walk to look at the street art, which was the product of a the recent Whanganui Walls street art festival.

There was an artwork of Rob’s mother and cousin, which was particularly special to see in Rob’s company. His mother was an elder in her tribe (Atihau Nui A Paparangi) and when she passed away last month his cousin took over that role….

We walked by the glassworks and spent about 15 minutes watching some expert glass blowing in progress…very mesmerising!  Next up was a trip to the lookout point on Durie Hill, which gave stunning views over the time own and all the way to the Tasman Sea. But the best part of this was a ride on the 100-year old public underground elevator to get back to the town. The elevator has a full-time friendly operator and is even used by local commuters as the quickest way to get up and down the hill!

We went to see a traditional Maori home or Marae from the Atihau Nui A Paparangi tribe (Rob’s mother’s tribe) and after lunch we went to the local museum, which had lots of fantastic Maori carving, canoes (wakas) and real skeletons of the extinct Mao birds.  Then it was back to base to get our stuff sorted for our departure tomorrow and dinner cooked by Nigel.  A pretty full-on but fantastic day where we learned and enjoyed so much from our immersive experience into the Maori culture. Thank you Rob and George!

A few observations since arriving on North Island just a week ago.  Although we are in New Zealand since January, North Island feels very different and feels like we are in a completely new country. The landscape is very different – both the mountains and the coast.  Supermarket food is considerably more expensive, even in the same supermarket chains.  Coffee in coffee shops is slightly cheaper and so far camping is significantly cheaper. There is definitely more of a Maori influence here than we saw in South Island.  In South Island place names and sign posts often had both the English and Maori names.  Here it’s generally just the Maori name.  And there’s are definitely more Maori faces – Whanganui as an example has 25% Maori population.   Unfortunately the driving hasn’t improved as we have come North.  Despite the fact that Kiwis are generally lovely, friendly people, they turn into completely different animals behind the wheel and we did a few have drivers shouting at us as they passed…!