And then it was Thailand….country 21. 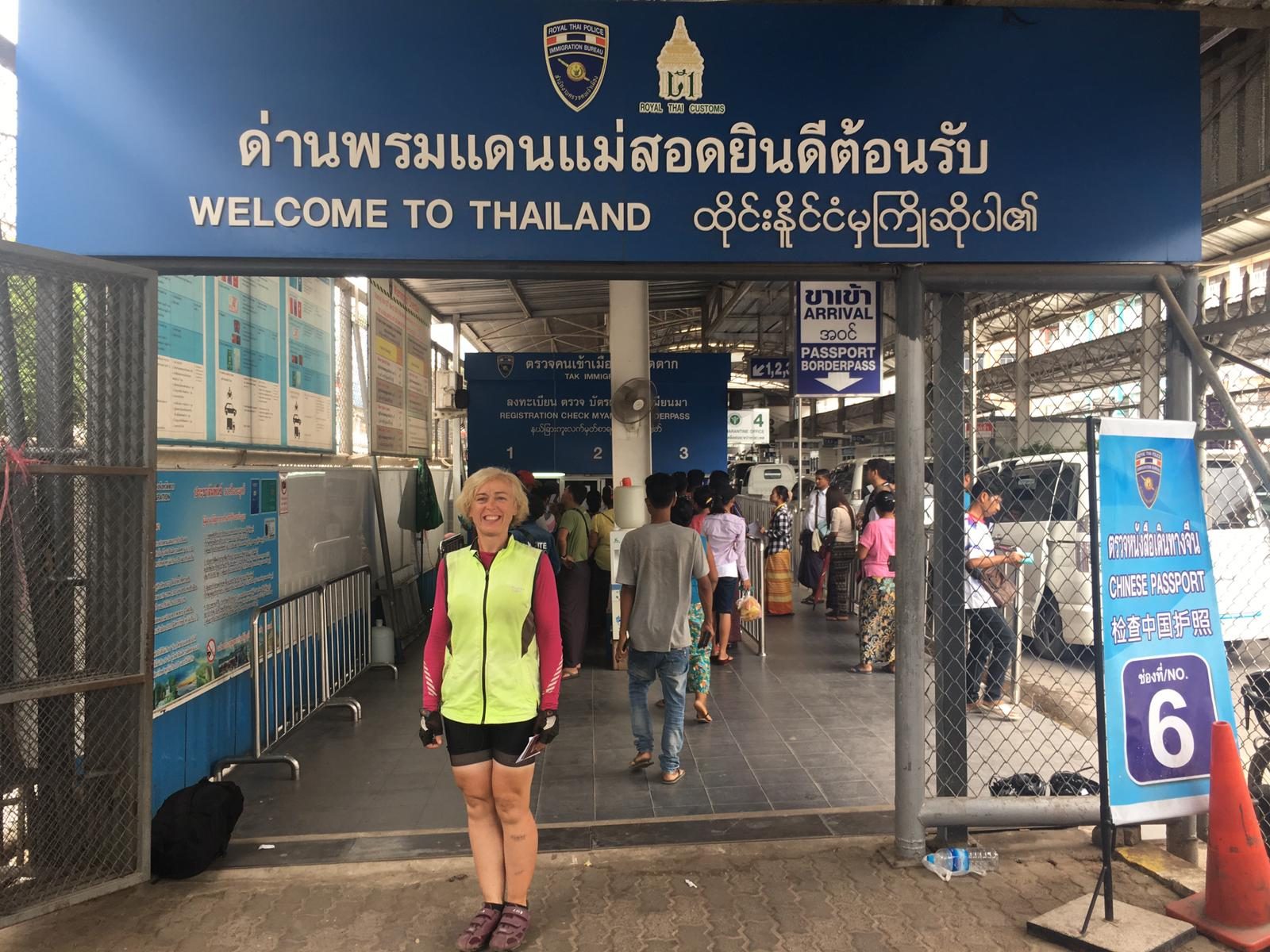 An early start for us today as we had a few hills to get over before our border crossing into Thailand.  We thought we had escaped Myanmar with no tummy/bowel issues, but poor Nigel continued to suffer – but still pushed on to get on the road early.  In complete contrast to yesterday’s conditions, today’s road was smooth and wide with a hard shoulder to cycle on.  We weren’t long on our way before we felt the first drops of rain, and with big grey clouds looming in the distance we knew it was only a matter of time before some serious rain set in.

We contemplated whether or not to put on our rain gear but as it was so humid we decided against it. ….big mistake! Just as we were hitting our first big hill, the rain started …and boy did it pour! The heavens absolutely opened for about and hour, soaking us to the skin.  As if that wasn’t bad enough we were groaning up the biggest hills we have seen in a while, so sweat was pouring into our eyes as well as the rain and completely blinding us.  If there was something to be thankful for it was that the rain was warm….it felt like we were cycling in a warm shower for the whole hour.  Maybe that will catch on as the next exercise craze….it was like a tough spin class, steam room and power shower combined!

To give an idea of the magnitude of the hills, we overtook a couple of heavily-laden trucks that were crawling up in first gear.  More worrying was the number of trucks and buses that just couldn’t make it up and had completley conked out in the middle of the road.  Absolute carnage! But thankfully the road was wide enough to take all this calamity without causing traffic jams or us having to stop….as I think if we had had to stop I couldn’t have got started again.

Anyway, for every up there’s a down and the sun eventually came out, so we cruised downhill while drying off in the sunshine….causing steam to rise from us in the process.

We stopped in Myawaddy, the last town on the Myanmar side of the border, for a break and an excuse to spend the last of our local currency.  We have this down to a fine art now…only having a few pennies left for necessities before we move on.  We had just enough for a snack and a drink and then it was off to the border.

This was probably one of our easiest border crossings yet…the Myanmar side were efficient and friendly and we had our passports stamped and were out of there within ten minutes.  A bridge separates both countries and half-way over the bridge on our way into Thailand we crossed to the left hand side of the road….the Thais drive on the left!  We filled in a form, handed it to another efficient immigration officer to be stamped and that was it….stamp in our passports and we were off….on the left hand side of the road!

Crossing into a new country is always a revelation but this was probably one of our strangest experiences yet.  It was as if we had arrived in the US….big, wide freeway style roads, KFC outlets, Dunkin Donuts, 7-eleven stores, American-style car showrooms and every second vehicle on the road was a giant pick-up truck.  There was even a Tesco’s in case we were feeling homesick! I have been to Thailand before but I don’t remember it feeling as westernised as this, and it’s Nigel’s first time so it was a real shock for him. And  to be honest neither of us are sure how we feel about it yet, other than to agree that it’s very strange.  Surely we are still in Asia??

Anyway we made it our accommodation, checked in and got a nice handy apartment-style room in the hotel grounds where we could store our bikes.  Unfortunately the army of helpers that were in every hotel in Myanmar hadn’t made it across the border, so we had to carry all our luggage ourselves –  but thankfully there were no steps so it was all easy.  After our usual ritual of shower and snooze we did our “new country admin”of getting phone SIMs and money sorted and went to explore.

Mae Sot is a typical, functional border town with nothing of significant interest…..and we were still struggling to get our heads around feeling like we were in the US.  This didn’t improve when we went out for  dinner later to a restaurant full of western diners.   Still, the food was good and the beer flowed freely so it wasn’t all bad!

A day of “life admin” and taking it easy as we were both feeling tired from the hills yesterday…and our night on the tiles in Hpa-An with Tom and Shelley was probably partly to blame as well!  But still we managed some well-overdue personal grooming and shopping, so it was still a productive day!

Silly us….Thinking we were back on western ground we let our guard down and had ice cubes in our water….BIG MISTAKE! Both of us suffered tummy/bowel issues within a few hours with Nigel much worse than old iron-stomach me! He couldn’t be too far away from a bathroom for a prolonged length of time, so we extended our stay in Mae Sot.  Not exactly the introduction to Thailand we wanted, but we are learning that we have to just roll with things on this trip and staying put was the sensible thing to do.

He started a course of antibiotics, which have always worked for him in the past.  But when there was no improvement after 2.5 days (Tuesday)  we decided to go to a doctor, and thought the hospital was our best option to find one that could speak English.

Well if we thought the NHS waiting times are bad, they are nothing to what we experienced here.  We had to go through 4 different waiting areas before were in the queue for the doctor.  And when we were only 3 people away from seeing the doctor they took a lunch break for 1.5 hours! When Nigel eventually got to see a doctor 5 hours after arriving at this hospital she told him to just keep taking the antibiotics and drinking electrolytes (which he was already doing) and that was it!  Initially it felt like a complete waste of a day but it was a relief to know that there was nothing more serious and that he was doing the right things.  Then as if by magic the antibiotics started working and things started looking up!

Even though Nigel was feeling much better by Tuesday afternoon we decided to stay one more day, just to be on the safe side…..especially as we will be going over some tough hills when we leave here. But to ease ourselves back into it we decided to do some local cycling on Wednesday morning …..and ended up doing a lovely 53km ride that took in some lovely mountain views…

…a pretty but not-very-full waterfall…

….and some VERY hot springs, where the water was almost boiling, which meant we couldn’t even put our hands in!

But it was a nice way to ease ourselves back into our cycling and get to see around Mae Sot …..having been here for so long!

In our quest for new cycling shorts (the padding on our existing shorts is now a bit thin!) we visited a local shopping mall, which was disappointly western.  Apart from a few Asian signs we could have been in Canary Wharf, Milton Keynes or anywhere in the US, which we found a bit disconcerting.  But when we ventured out later to a night market full of locals selling fruit, veg, fish and meat, we knew we were somewhere in the Far East.  Quite lot of interesting food that we had never seen before!

A couple of things to note at this stage. We are aware that there are Burmese refugees in Thailand, and being so close to the border in Mae Sot it’s something we got to see first-hand ourselves in the last couple of days.  We extended our stay at our hotel on a day-to-day basis and assumed we would be fine to stay in our oversized room across the car park from the actual hotel.  However on day 3, the hotel staff told us they needed our room and we had to move.  A mild annoyance at having to pack up our stuff, but as we were allocated a ground floor room and were allowed to take our bikes onto the balcony, the annoyance was very short-lived. We saw the staff putting in extra mattresses on the floor and that afternoon when we saw quite a few families in the hotel grounds we both commented that they could be refugees, but didn’t really think it to be honest – we just thought it was a large group booking of all the family rooms.  But at breakfast next morning a bus arrived with “International Organisation for Migration” written on the side and before we knew it the families were all on a bus and heading off to where ever.  Needless to say it was a very sobering start to our day and yet another reminder of how lucky and privileged we are, especially when another group arrived that evening!

Initial observation from Thailand is that while the people are polite and professional they are not overly friendly.  Maybe it’s because we have come from Myanmar where they were super friendly OR maybe here they are just much more used to western tourists and we are not as much of a novelty, but it’s definitely very different.  We noticed it in our hotel as well as at the hospital when we were obviously lost and wandering around in need of directions or help.  We would like to think that if we were in London in the same situation, a member of staff or someone else would ask if we were OK or ask what were we looking for.  Here, even when we asked at information, we were pointed in a general direction but not necessarily in a helpful or friendly way.  But we are keeping an open mind and it might just be this particular region or area.  And to be fair, out cycling earlier when we waved and smiled at people they generally smiled back.  So that’s our strategy….smile and wave like we did in Myanmar!