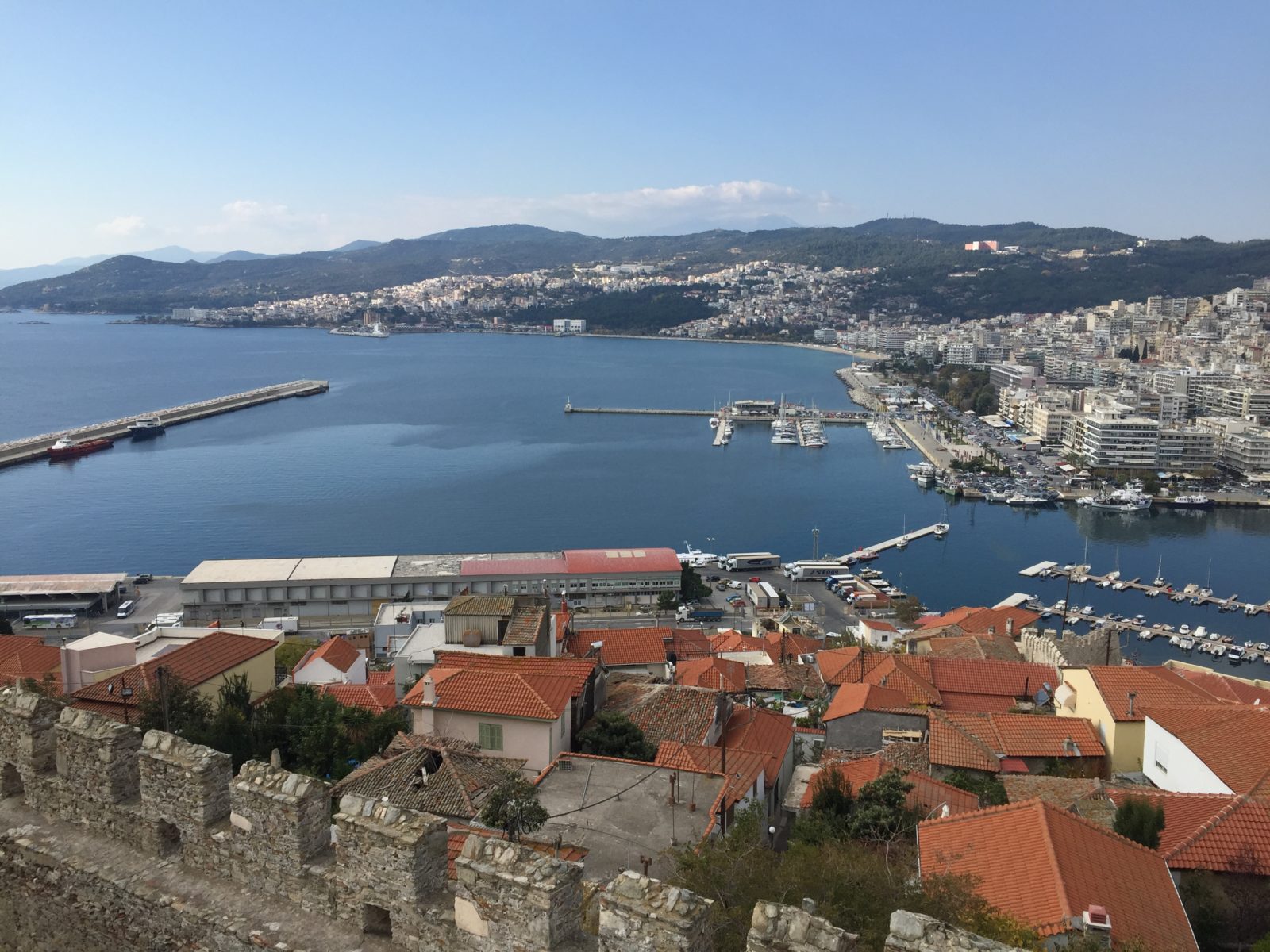 After nearly three weeks in Greece, it’s time to move on.  Unfortunately our overall impression of the country hasn’t been that great for 3 main reasons:

1. For such lovely scenery there is rubbish absolutely everywhere which completely spoils it, and in our view is completely unnecesssry as most of it is recyclable.  Not very nice to go onto a beach or a viewing point to come across dirty toilet roll, nappies, beer cans and plastic bottles in large quantities strewn everywhere… 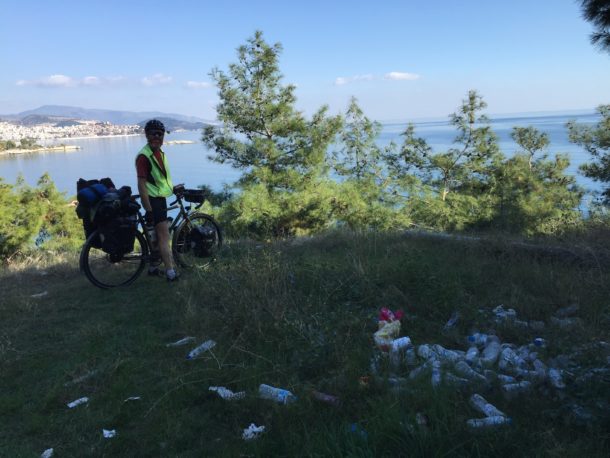 2.It’s also the country where we have had the worst experiences with dogs chasing and ferociously barking at us – and they haven’t all been stray dogs either, as some have had collars on.  Our ploy to shout at them to scare them off or to stop cycling and get off the bikes hasn’t completely worked as they have just snarled at us and continued to bark.  In a few instances they were quite terrifying – the worst one being when one attacked my back panniers and I could feel the bike wobbling, but I was a bit scared to stop in case it attacked me.  Thankfully it didn’t!

3.  Everything ie accommodation, groceries, eating out, coffees is very expensive in a not-good-value way.  Considering we are so off-season that a lot of places are closed or doing limited food menus, we would still put food, eating out and coffees on a par with London prices – surprising really considering the state of Greece’s economy.  It must be quite difficult to live here if the wages aren’t on London-weighting!

But for the negatives there have also been loads of positives and we have made other more general observations as well, including:

1. The people are absolutely lovely – friendly, helpful and just really nice.  And obviously being used to tourists their English is great which made things very easy for us.

2.  And the nice people include drivers…we have found them to be the best and most considerate of our trip so far. We had expected erratic “Mediterranean” driving, but it’s been great…and this is surprising since we haven’t seen many other cyclists on the road.  They give us a wide berth when passing and slow down behind us when they need to instead of pushing on through.  We have even had a couple of instances of drivers stopping to give us snacks or handing chocolate bars out their windows to fuel us along, which hasn’t happened anywhere else…! And of course lots of waving and cheering us on up hills, which is always encouraging.

3. Health and safety is non-existent…in a very comical way. We have seen chefs walk out of restaurant kitchens smoking cigarettes and vans speeding along the road with people standing up in the back sliding all over the place!

4.  Cafe and coffee culture …it is definitely the land of coffee and coffee shops and restaurants – the most we have seen anywhere! There are lots of old traditional coffee shops that are full of men, day and night, sitting watching football or just chatting, as well as the more modern chains where the cool people go (Us obviously!). The coffee varieties include a sweet frothy coffee as well as Greek coffee which has the grainy bits left in the bottom.

5. The beer is surprisingly very good. This was our favourite one. 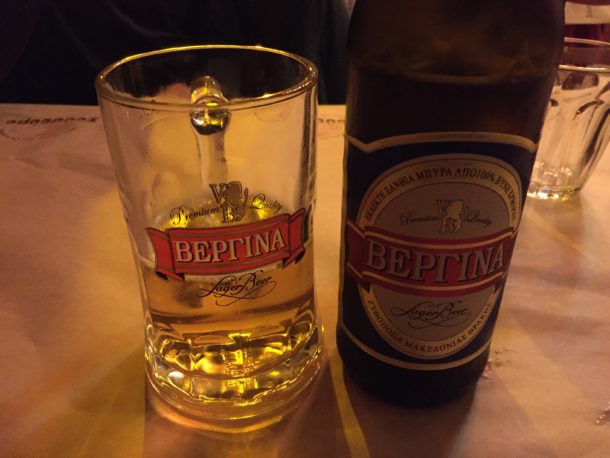 6. We have seen cotton and olive harvesting for the first during our travels in Europe.  In the northern part of the country there are a lot of cotton fields, which we saw being harvested manually and mechanically. The olive harvesting was all over the country.  Nothing surprising there I guess, but it’s just not something you see every day back at home.

7. Greeks still refer to Istanbul as Constantinople which is how it was known pre-Ottoman era…which we now know is a period of history that the Greeks aren’t proud of.  So it’s interesting to hear them almost correct us when we mention Istanbul. 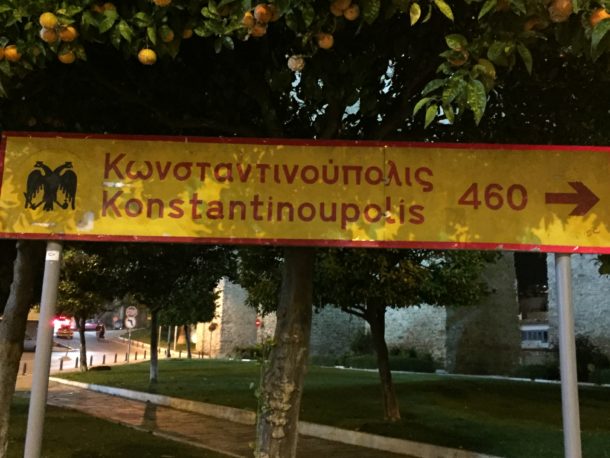 8. Lots of little “churches” at the roadsides…again more than we have seen anywhere, and some of them are really elaborate.   We asked what these were for and have been told they are shrines to people that were killed at that spot. 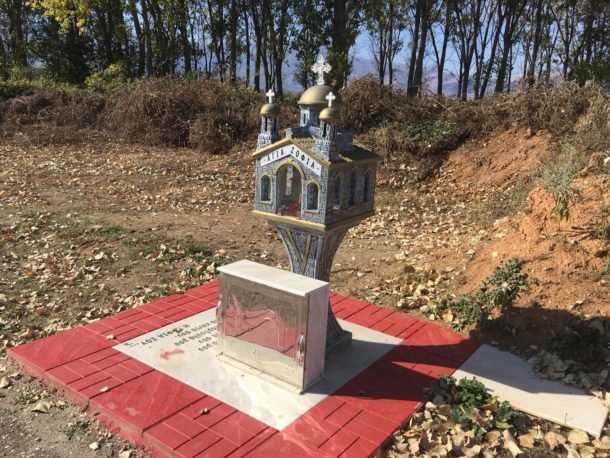 9. Pick-up trucks ‘utes’ are the vehicles of choice here.

10. Cats. So, as well as stray and feral dogs, the country is full of cats. Like many of the dogs we aren’t sure if they are pets as we don’t see people stroke them or feed them, but they are well-fed, and restaurant owners don’t seem to mind them hanging around. As for the dogs, those that are pets never seem to be walked….we have seen one lady walking a dog in our time here.

11. Bread Rolls…the Greeks don’t generally do bread rolls – and if they do, the supermarkets don’t stock them.  This is purely a practical observation from our perspective as rolls are easier for us to carry than bread!

12. Cashpoints and ATMs have been fairly limited throughout the country. Even in the bigger towns and cities we have had to hunt for them – for example, in Edessa, a reasonable size town, we only found two ATMs right next to each other and they always had a queue! All of the bank machines we used, with the exception of one, charged a feee to withdraw money, whereas in most other countries this has been mostly free.

13. We have heard lots of songbirds singing their hearts out in many of the places we have visited.  They are kept in cages and you can hear them when windows or doors are open.

14. Where outside sweeping was a national pastime in Bulgaria, in Greece its washing their patios. There is definitely no shortage of water here with the intense patio and balcony washing that goes on! Houses are generally well-kept and there are lots of lovely big posh houses throughout the country.

15. Ice cream shops don’t seem to feature as much here as any of the other warm countries we have been through.  Granted we are not in summertime, but we just didn’t see many shops dedicated to ice cream.

16.  There is a bizarre rule that after any business transaction, unless you receive a paper receipt for your purchase you are not obliged to pay…so all shopkeepers, restaurant and hotel staff insist on almost pushing it into your hand.  We can only guess that this is their government’s way of ensuring sales are registered for tax collection purposes.

17.  We only realised at the end of our stay that wild camping is actually illegal in Greece…..ooops!