Weird vibes …and then onto our best Greek destination 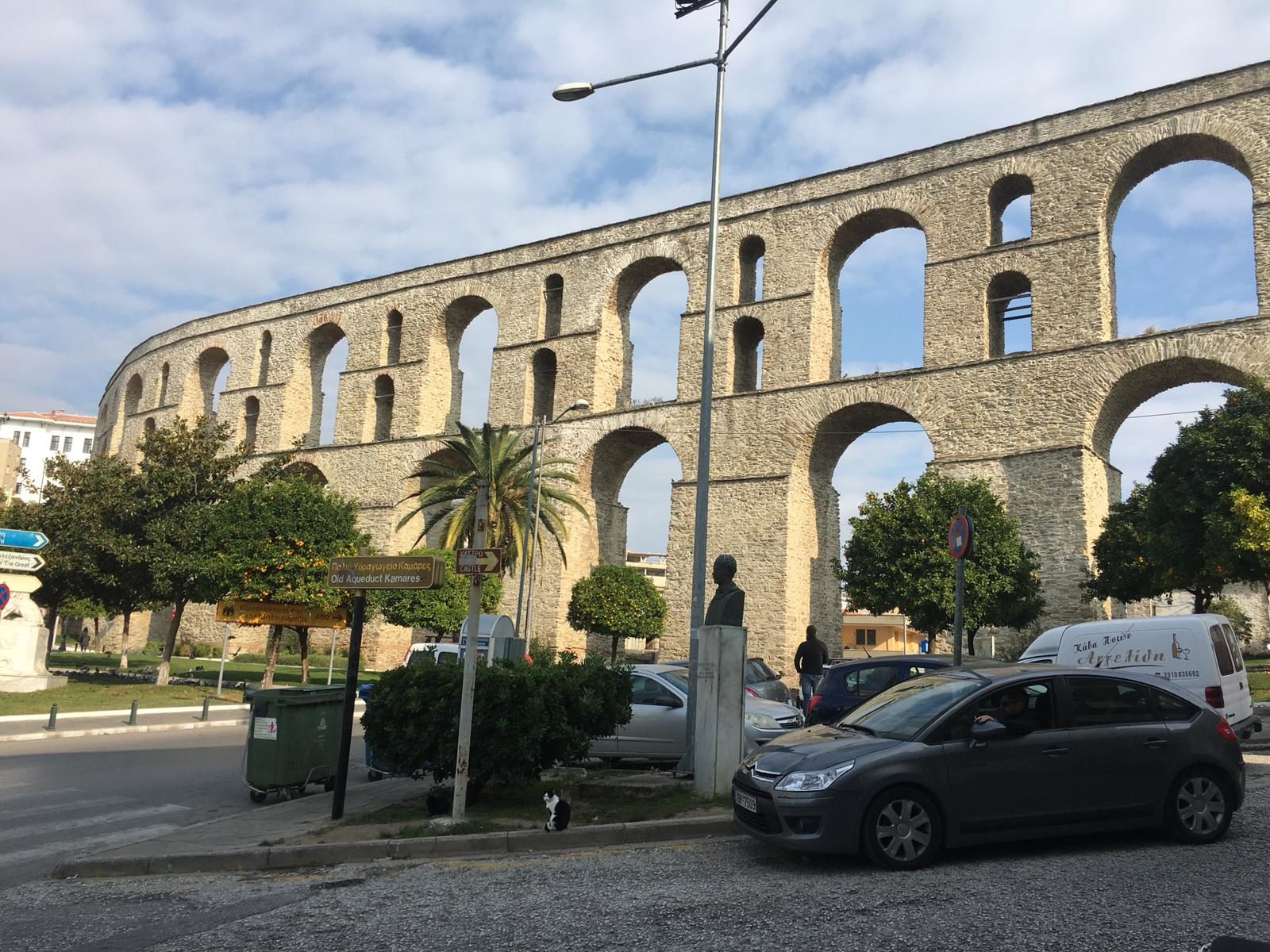 So after five tough days on the road we set out from our indoor accommodation (which felt positively luxurious!) hoping for a couple of easier days on the road as we made our way to Kavala.  Mileage-wise we planned 2 relatively short days to get there and expected the terrain to be easier, but you can never 100% predict this.  But we set off in sunshine hoping this would be the case….and it was.! Very easy cycling on quiet Sunday roads, with lovely coastal views and an early coffee break to get us in the Sunday mood.

It was all going swimmingly well until Nigel heard something rattling in his back wheel.  He thought something was stuck there, but on further investigation realised his brake pads had gone….so it was everything off the bike and an hour of finding the correct kit and fixing it! Even I helped 🙂 And to be fair we were at a lovely spot by the sea and had only planned a 50km day, so if there was ever a good time for a bike malfunction, this was it. 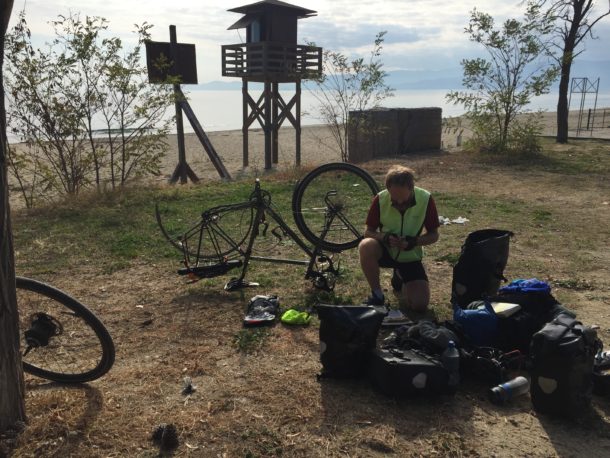 All sorted and by then it was lunchtime   so it was well after 1pm before we got back on the road – with only 15km under our belts.

Destination for the day was Loutra hot thermal springs, which are natural springs set in a forest.  It was a really lovely ride to get there…blue skies and a quiet coastal road that ran between the mountains and the sea.  You really couldn’t get any better! 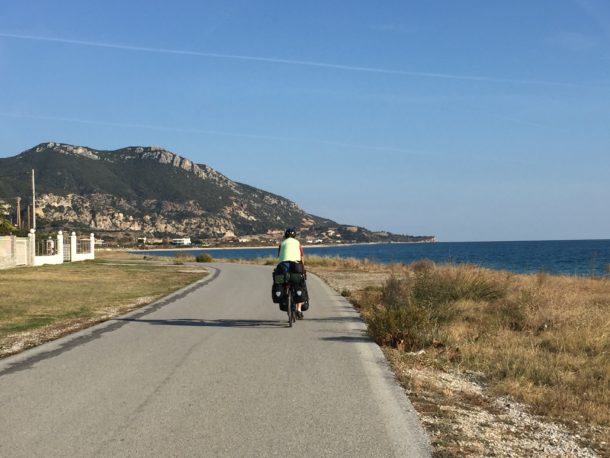 We arrived at the springs around 3.30 and we both felt that there was a weird ‘feel’ to the place.  Maybe it was the derelict and graffiti-sprayed buildings that we’d had to cycle past to get to the springs, or the fairly large number of stray dogs that were wandering around or the fact that there were groups of mostly men there as well as odd individual men hanging around, some of which looked decidedly dodgy…. but something didn’t feel as idealic as it should have.  But we had to make a choice of either going for a dip in the springs and then setting up camp before it got dark or just turning around and leaving.   We opted for the first one and we managed to find our own little patch to relax in the water that was warm enough to be a bath.  Absolute bliss after a day in the saddle – and we stayed in the water long enough for our hands to get wrinkly! (Our bodies are already there without the warm water effect!) 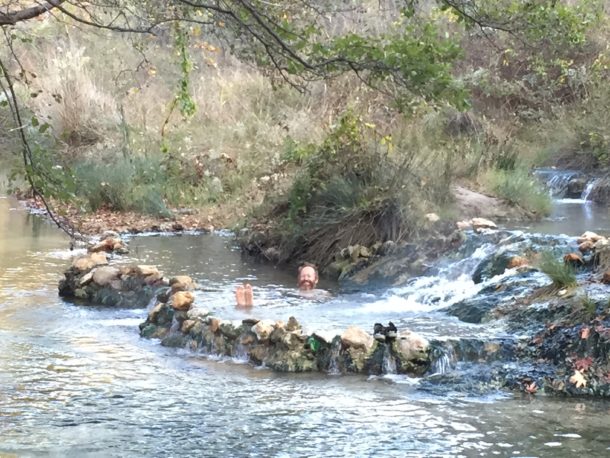 Set up camp and had dinner and while were washing up in the dark a car pulled up and a lady asked if we had seen three blokes dressed in black.  We hadn’t, but she then told us to watch out as they had stolen some valuables earlier and were hanging around looking to steal things, so we should be careful….nothing like that to unsettle you before bedtime – yikes! We were in the tent at 7pm with all our valuables with us. Normally we would watch Netflix on the iPad when it’s dark but we were determined to be as quiet as possible and listen out for any “intruders”.  Thankfully we were on the quiet side of the springs so although we heard lots of comings and goings and “yoofs” partying, none were too near us…but it definitely wasn’t one of our best nights’ sleep and we were glad to see daylight so we could move on.

Again not as straightforward as we had hoped as we were followed by stray dogs as far as the main road, 1km away. Granted they were pretty harmless but they chased us when we cycled, so we walked the bikes for that kilometre as we didn’t fancy being knocked off  in the land of weirdness… 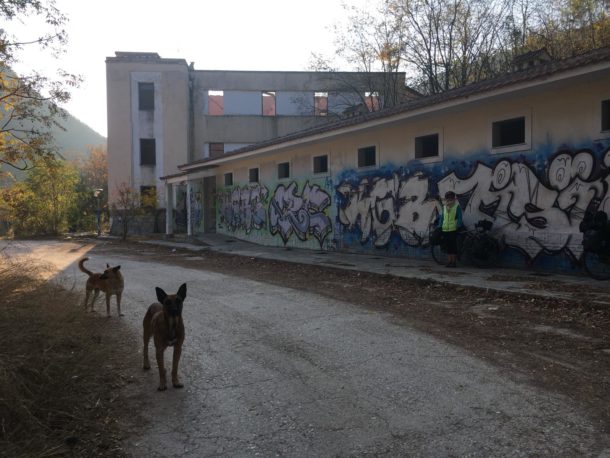 But back on the road and after an hour of coastal views and sunshine we were feeling normal vibes again – so decided to celebrate with a cake stop.  Yes – return of the calories…cake-watch is back! Our first cake stop in Greece and it was well worth the wait. 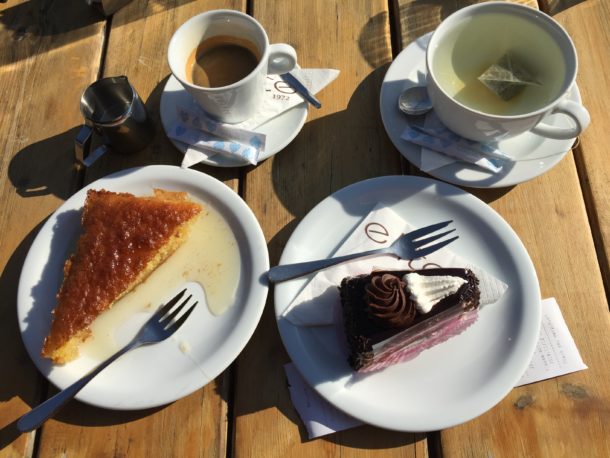 Fuelled up for our last push into Kavala, we made it there for lunchtime and our initial instincts are that we like it – with one caveat…. its very hilly and I had a complete “can’t do it” freeze at the top of the hill down to our accommodation. We had gotten off the bikes to check the house numbers and because of the steepness I had to take off my cycling shoes to walk down the street to stop myself slipping,   When I got back on the bike to cycle down I absolutely froze….couldn’t move!! I had to jam on the brakes to keep the bike in place and I was too terrified to even get off….remiscent of being at the top of a scary ski slope!  Poor Nigel had to come and rescue me, hold the bike while I prised myself off and he cycled it down, while I walked in my socks.  So apart from that, Kavala seemed to be a nice place.  Instead of going to explore as we usually would on arrival in a new place, we had a lazy afternoon lounging around and catching up on chores (oh the luxury of a washing machine for 2 whole days!).  We wandered into town for dinner in the evening and had a great meal in an old Turkish Hamman (Turkish baths)..how life can change in 24 hours of a lifecycler!

During our wanderings on Tuesday morning our instincts about Kavala were proved right – it’s by far my favourite place on mainland Greece.  It has a really interesting history, particularly that it was occupied by the Ottomans until 1912, so it almost makes it more Turkish than Greek! Other random facts:  the apostle Paul arrived here on his first voyage to Europe, Muhammad Ali of Egypt, founder of the modern state of Egypt was born here and it was the occupied by the Bulgarians during the first Balkan war. The town architecture has an impressive aqueduct in the middle of the old town.. 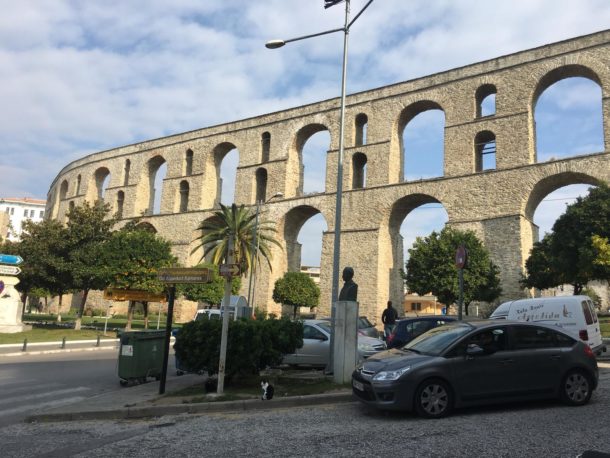 …and a Byzantine castle on the top of a hill, with amazing views over the town and the harbour. 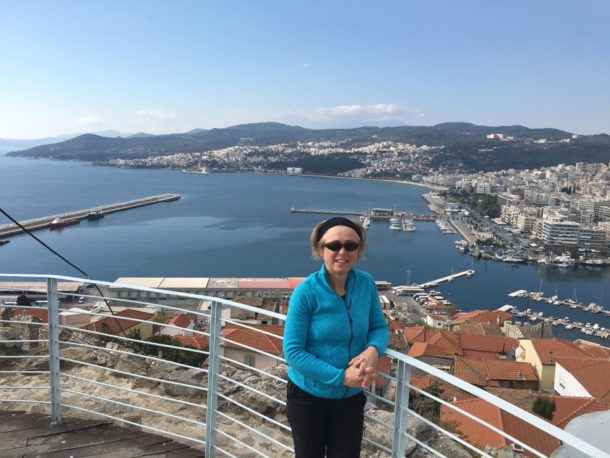 Dinner was a seafood platter in a lovely taverna in the old town, that turned out to be full of locals on a Tuesday night.  Just a really nice place to hang out and spend our last free day before we hit the road for Istanbul – our final stop in Europe. Bring it on!