Just another day in (Slovak) paradise… 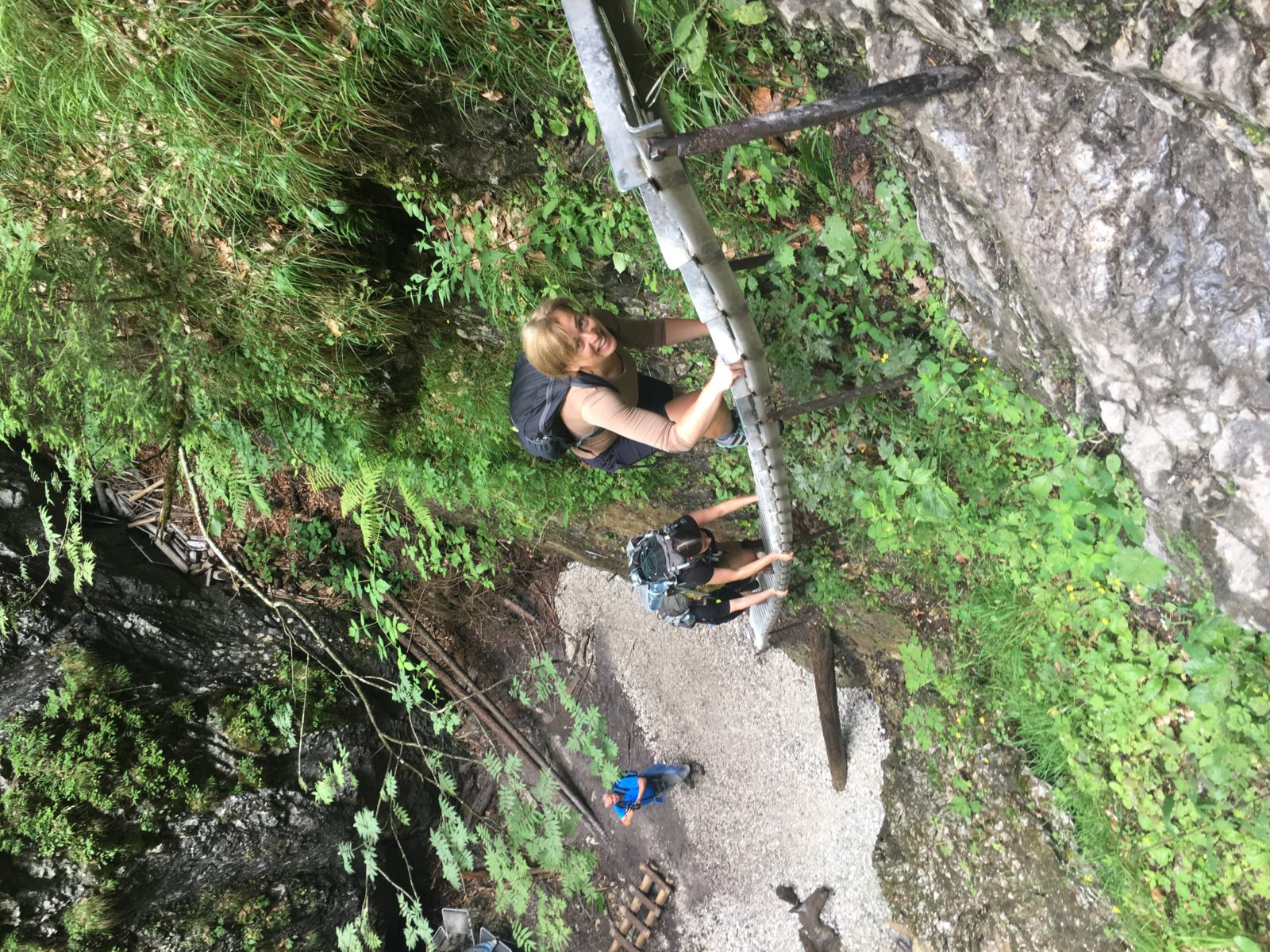 The Slovak Paradise is a mountainous National Park to the east of the Low Tatra Mountains. Rather surprisingly it doesn’t appear in the list of the 12 best things to do in Slovakia when you Google what to do in the country; this generally lists the cities and towns to visit. But what this means, is that it is mainly untouched by anyone other than the Slovaks. There is plenty of hiking and mountain biking to be done in the summer as well as Nordic skiing in the winter. There are also a few deep gorges that can be hiked/scrambled, the majority of which are entered from the north of the Park.

The gorges are a sort of obstacle course of rivers, rocks, fallen trees and man-made ladders, metal steps, chains, etc, which make them a challenge to walk through. They were recommended by Jan in Branska Brystica as worth doing, which is partly why we changed our plans from going to Dedinky.

We were up at our normal 7:30am and out the door on empty (nude?) bikes for the short 6km ride to the edge of the Slovak Paradise and although we were early there were already quite a few people there. The walk/scramble started off easy enough gradually ascending along a river bed. At this point and for the rest of the morning it was more a case of keeping our feet dry by tip-toeing across stones and fallen logs. As the gorge got deeper and the ground rose steeper there were man-made wooden walkways to negotiate, though not too difficult and surprisingly unslippy. 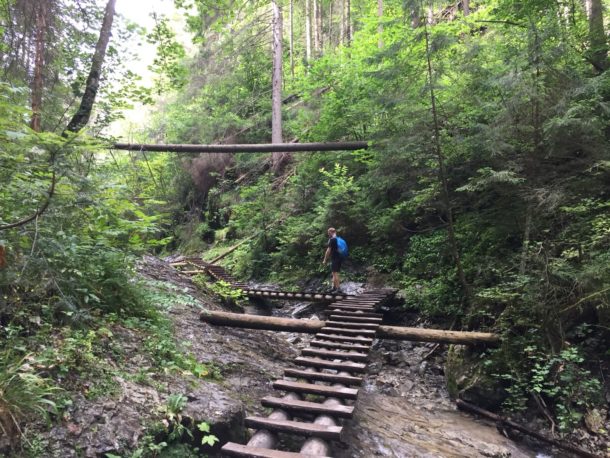 The gorge was very deep and lush green and very pretty if anyone bothered to look around. Many of the locals saw this as a speed event and were determined to run the gorge as quickly as possible. This meant that they missed much of the beauty of the place, which is a shame.It also didn’t get them very far as the gorge narrows to a point where metal footholds, walkways and ladders are required to squeeze through narrow, almost vertical climbs. 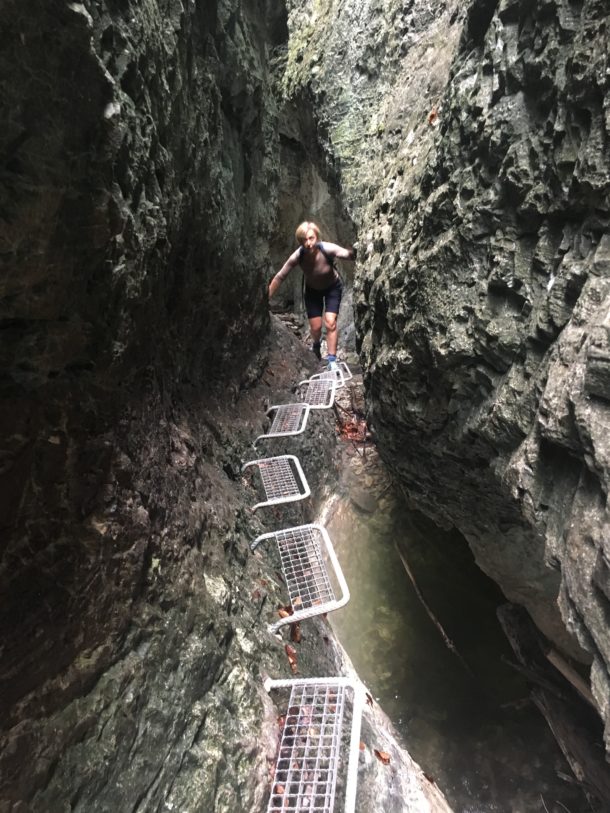 Where this happened there was a backlog of people waiting to get up to the higher levels. There was a certain amount of impatience at these places and at one point a teenager behind Martina was basically standing on her heels to try to push past. 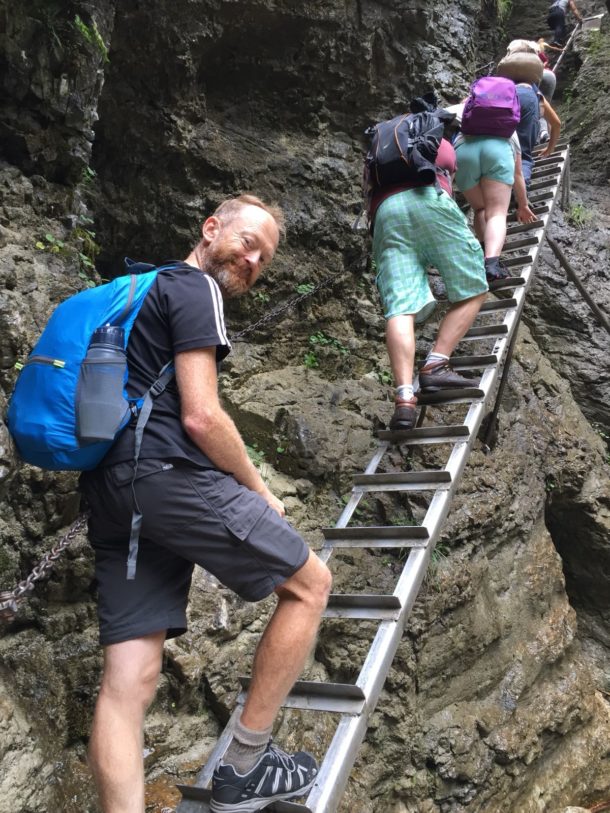 Notwithstanding that the climbs were challenging, especially for Martina who is not too good with heights, so there was definite adrenaline rush! There were plenty of areas where there were multiple levels of ladders and walkways with waterfalls cascading down next to us; quite spectacular all told. 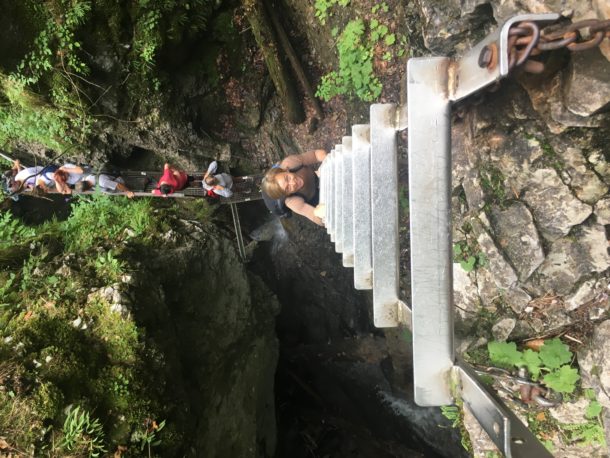 We made it to the top and then got confused with everyone else as to how to get back down. You’re not allowed to go back down the gorge as it would be too difficult, especially with lots of people coming in the other direction! The way back is not signposted well, but we found it in the end. By the time we got to the bottom for lunch it was a 3.5 hour trek.  A really nice experience and well worth the effort of getting here. As a bonus we could see the High Tatras in the distance on the way down.

It was then a simple case of riding back to our accommodation for a snooze, pizza and bed! A few more days in Slovakia as we now make our way to Hungary – country 11 on our list!