And here is the nudes… 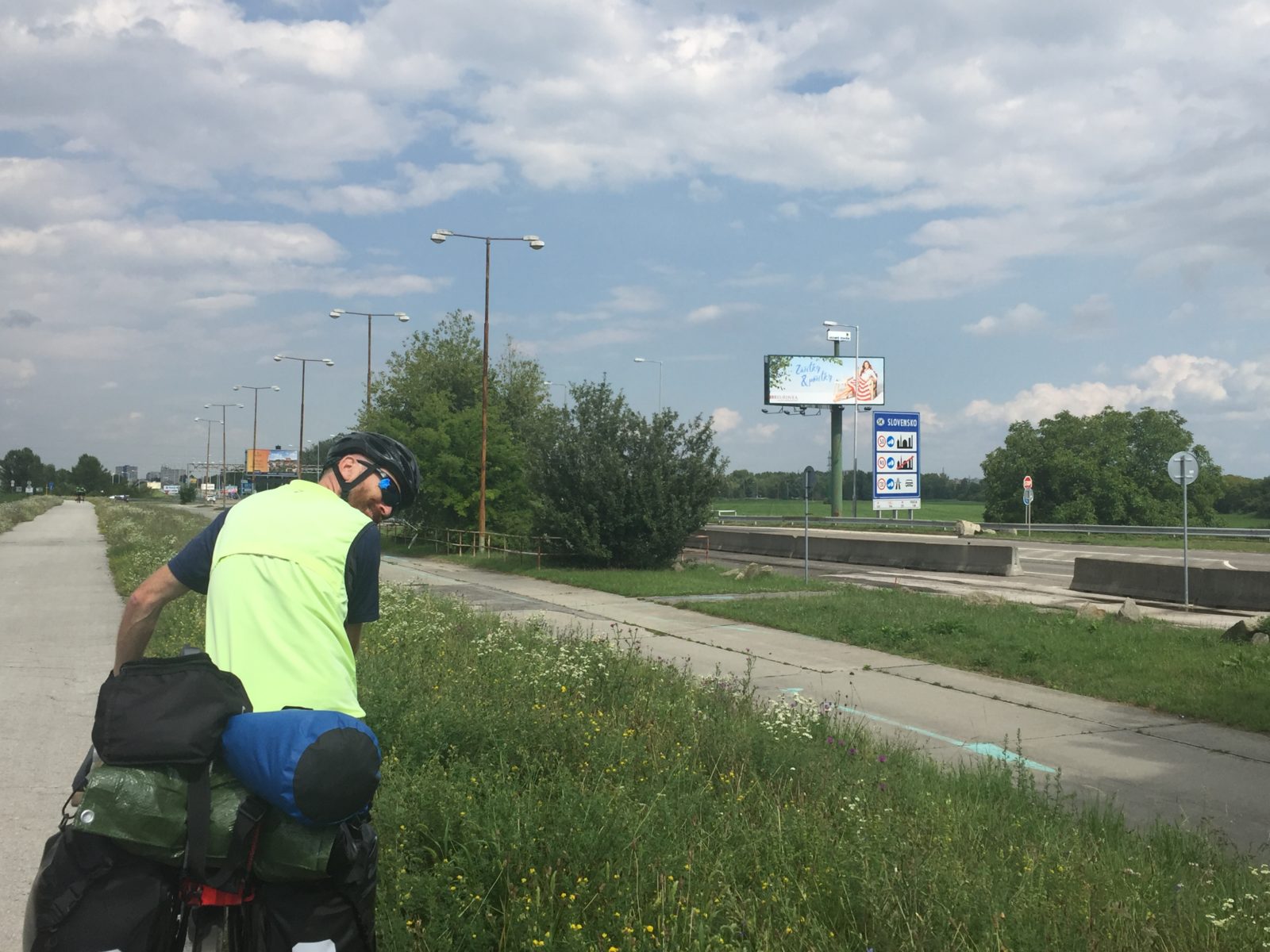 The 30km between Vienna and Bratislava is, in fact, about 50km in a straight line and as the bike path goes 84km! So, it turned out to be a full cycling day….we must remember to look at our route in more detail going forward! Usually it is getting into a city that is difficult on a bike, but as we have mentioned this wasn’t the case getting into Vienna; and while getting out is usually much easier, the opposite was also true of Vienna! It was confusing to say the least and involved crossing the river to the north bank. We had, rather stupidly, assumed that we could just jump straight on the cycle path we’d come in on and carry on east, but that wasn’t to be.  So, after a bit of stopping and starting we finally made it out of town on the north bank. It was a nice day and there were a few early sunbathers on the banks.

It was at about this point that we noticed that many of the sunbathers had a distinct lack of clothing. Did we miss a sign? No. Was there anything to say we were straying into a naturist area? No. Were there other cyclists peddling along the path? Yes! All rather bizarre and not something you want to see that early in the day I can tell you! The average age of the bathers must have been in their 60s and one was even cycling a bike towards us.  Enough said, we were out of there…and no, we didn’t take photos for evidence!

We met a few other long distance cyclists along the way and in particular where the route got a bit confusing due to a diversion which meant taking a very small ferry back across to the south bank. The ferryman managed to get 6 people and our bikes on in one go and charged 5  Euro each for the 2 minute journey – we all left feeling well and truely ripped off! 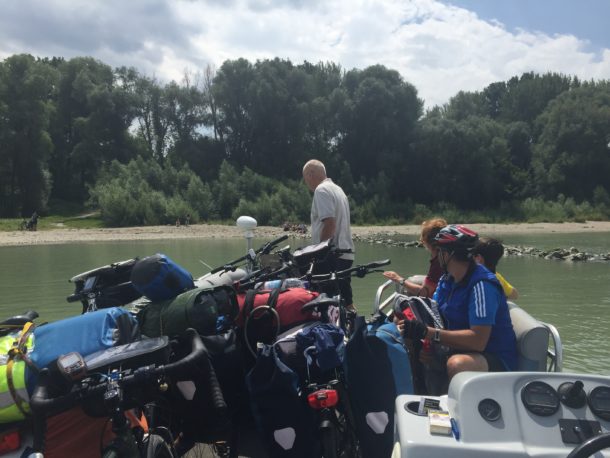 The majority of the rest of the journey was uneventful and if anything a bit dull except for one part: at Petronell-Carnuntum there is the ruin of a Roman monument called Heathen’s Gate, which is interesting in its own right and we had a good look around. Apparently the Romans had quite a presence in this area because of the River as you might expect. We also met another cyclist called Friedbert, who had come from Frieberg in Germany and was cycling the whole length of the Danube to the Black Sea and was trying to catch up with some friends the other side of Bratislava. A really lovely chat with him and he mentioned that he’d just been asking farmers to free camp with no issues, so perhaps we need to be a bit braver on this front in the future. 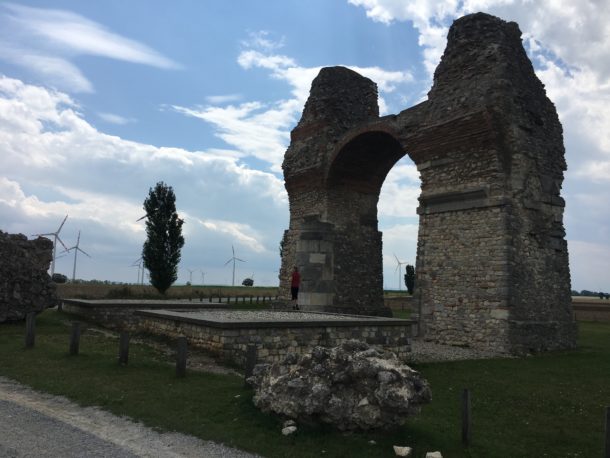 We crossed the border into Slovakia about 3km outside of Bratislava although the only sign to say that we had done so was on the nearby main road. We made it into the city by 4pm and found our AirBnB on the edge of the old town. Took the owner’s advice and ate a Slovakian meal in a place in the centre of town – the venue was great, but the food was back to stodgey potato dumplings and sheeps cheese etc. Not our best meal, but very filling after a longish day in the saddle! 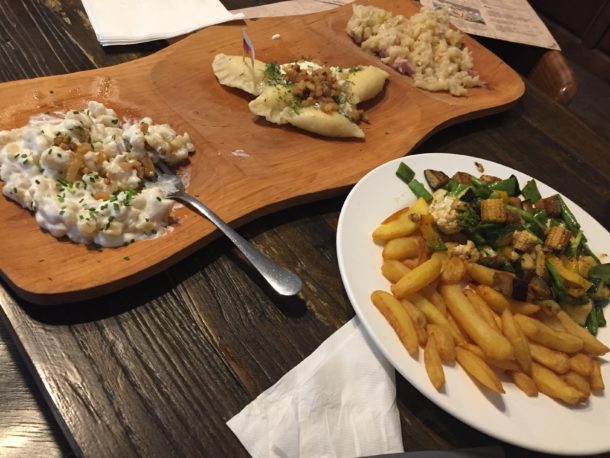 We were up and out by 9:30, so a bit of a lie in, for what has now become the obligatory free walking tour. We have mentioned these in the past, basically we turn up at a designated place, usually in the old town, where a guide takes you around and tells you all about the history for a couple of hours. We have found they are useful in more than one way to us: firstly they are informative and now that we have done a few in various different countries the history is starting to join up. Secondly, it gives a good orientation to the new town/city so we know where everything is and where we might want to go after. And finally we meet a few interesting people along the way. The tour isn’t actually free, it’s tips-based and so far they have all been pretty good, exception being Vienna which was a bit dull, and worthy of about 10 euros each in our mind.

The tour of Bratislava was particularly good and the guide excellent. She took us all around the town and up to the castle which has amazing views over the river, the old Soviet accommodation blocks on the other side and the city itself.  Two and half hours later she delivered us back to where we started and we then hooked up with Sheena and Tom, two other tourists from the UK, for lunch. They are well-travelled and wanted to know what we were up to with our cycling, so we went to a traditional Slovakian pub for lunch and a chat. It was a lovely relaxing lunch and we managed to squeeze a load of recommendations out of them for other places to visit, especially in Southeast Asia. 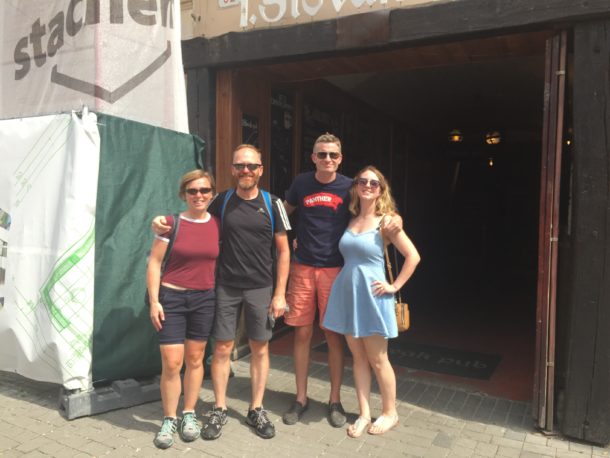 The afternoon was spent revisiting the old town, eating ice cream and sitting outside cafes watching the world go by. As it was Friday there were some new arrivals and it was interesting to watch the early shenanigans, especially a gang of Brits who were very obviously on a stag do making a beeline for the €1-a-pint happy hour pub! We were sort of sauntering back to our flat when we came across a French promotional event in the main square and just next to it adjacent to the Primacialne Palace was a long line of well-dressed folk arriving for an event. There were also a load of diplomatic cars arriving, so not wanting to miss out we decided to stay and watch, so parked ourselves on a suitable bench and had our sandwich lunch, which was now our evening meal! Turned out that there was no one we recognised, though we see a woman who looked very like the Romanian PM outside. Knowing our luck Emanuel Macron probably turned up a minute after we left!

A very easy second day.  We’d seen a lot of the town the day before and during the walking tour had been told about the view from the Soviet soldiers’ memorial on a hill nearby which we decided to visit. Took a bit to find it but after a short steep climb we were there. The memorial is to the soldiers killed in the fight to overthrow the Nazis during WWII. The views at the top were somewhat obscured by trees, but still worth the climb as the memorial is stunning. It’s sad that the Slovakians were taken over by the Soviet Communists after they were liberated from the Nazis. 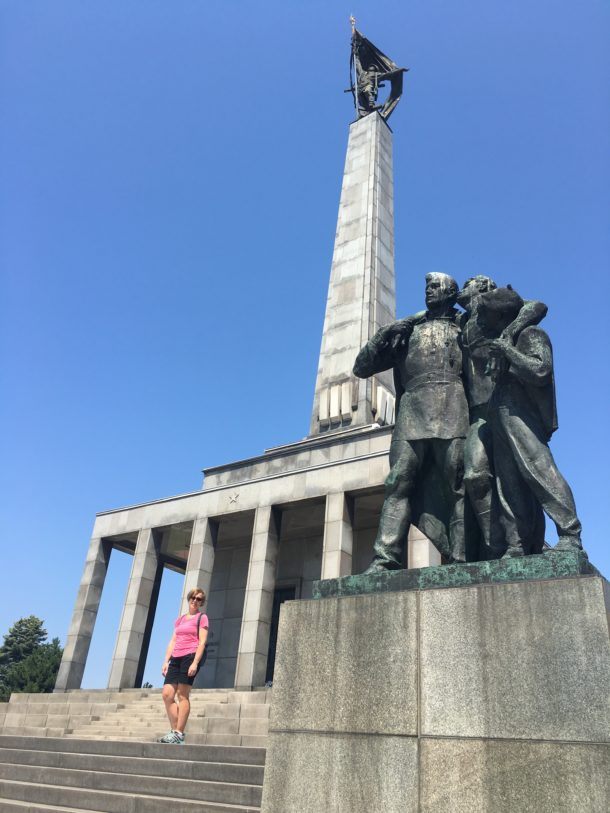 We continued our walk back to the castle to have another look at the views as we were a bit rushed during the tour. Found a lovely spot under a tree in the shade as it was quite hot and had lunch and a brief snooze.  As I said, a very easy second day – we are off out into the wilds tomorrow, so need to keep our strength up! We then headed back to the old town to chill in a cafe and watch the new batch of arrivals and the remnants of the Pride parade which was going on in town. Had to do the obligatory stocking up from the supermarket before heading back into town for a Thai dinner (can’t keep doing the traditional Slovak meals just yet) which was good, but we were still a bit hungry afterwards.  We then stopped by a square for a beer, which we have passed on our way home every evening here which is full of locals, and really lovely, before heading home to pack and ready ourselves for heading out tomorrow.

We have really enjoyed our 2 days in Bratislava.  A great place to visit for a few days as it’s small enough to get to see everything and know your way around, and steeped in history so lots of places of interest. And it’s not at all expensive.  Highly recommended for a city break!