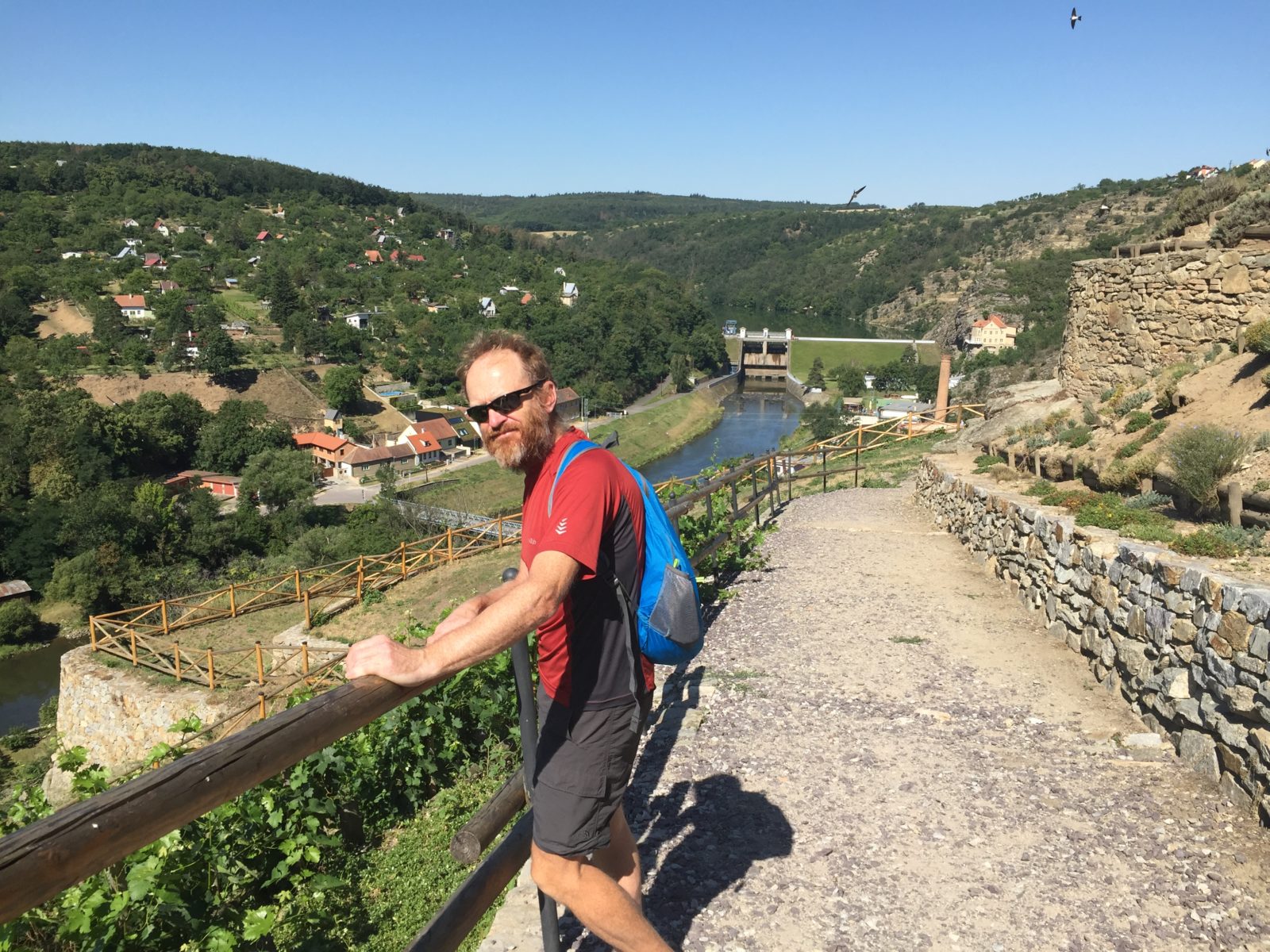 Awoke to the sound of a lawnmower at 6.30am – on a Saturday!!  Seriously – who cuts grass at that time at the weekend??! Nothing else for it but an early start and we were genuinely sad to say goodbye to our fantastic little retreat in the hills. Started the day with a lovely downhill cycle with much clearer views than we had the day before; and the day pretty much continued like that – really lovely scenery, perfect cycling weather and roads weren’t too busy . We did stop for a cake break in Litovel – the home of a lovely beer sampled by Nigel last night! I haven’t said much about Czech cakes at all…because although we have had a few and taken photos they haven’t overwhelmed us enough to warrant a dedicated compliment yet…. but we are still trying!!

Decided to get back to camping as the weather has improved, and we ended up in a lovely campsite next to a dam. 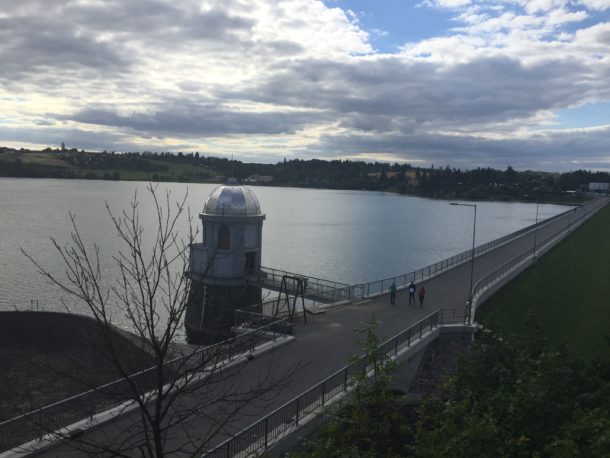 It’s the first Czech campsite we have been to and also the busiest one we have stayed at so far. Lots of friendly Czech families in a nodding-and-smiling sort of way, apart from the one lady who seemed to take umbrage to Nigel being in the kitchen beside her and a yappy dog that kept nipping at his ankles (It’s the facial hair!!). We opted for a cabin as all the tent sites were on a slope and with shutters on the cabin windows to make it completely dark, we decided to take advantage of the darkness to get as much sleep as possible.   It worked for me slept but unfortunately not for Nigel who heard the fireworks and loud music on the campsite blasting until the early hours!

Headed off on Sunday morning on what I can only describe as probably our most spectacular cycling day outside of Norway.  Very hilly (6km straight up from the campsite first thing!) but quiet roads through forest and woodland took us up to the Moravian Karst – a nature reserve and limestone rocks and caves – which was absolutely stunning. 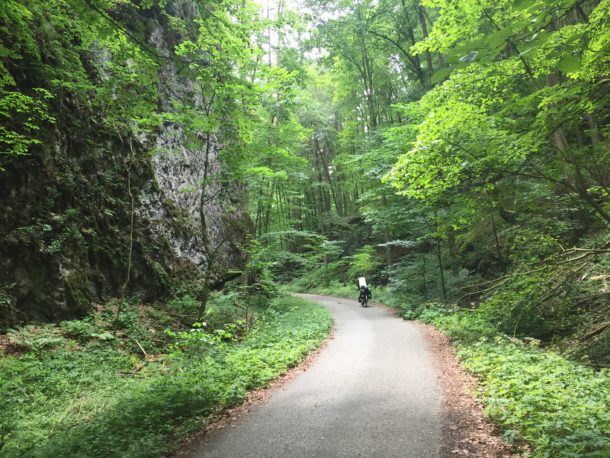 We cycled through the main gorge, which is closed to traffic, so makes it a spectacular ride – with one slight inconvenience of fallen trees on the track, which meant we had to unload the bikes, lift them over the fallen trees (well Nigel did that with the help of a Czech cyclist who had stopped!) and then reload them all again. 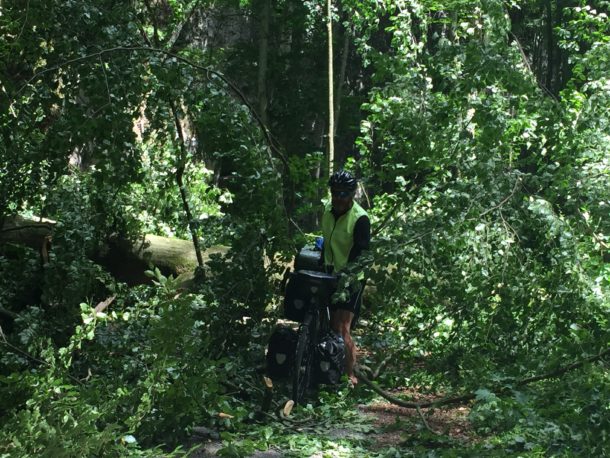 But it was worth it for the amazing scenery.  We got to the entrance of the Punkva Caves, which are on the list of the top things to see in the Czech Republic, but we couldn’t get tickets a week ago when we contacted them, and that was still the case.  But it didn’t matter to be honest as the scenery was spectacular enough without seeing them. We had lunch there listening to the peregrine falcons screeching in the background, and then cycled through to the end of the gorge.

Late afternoon we weren’t so lucky on the roads and they were quite busy because of other road closures directing traffic onto these smaller country roads.  At the 65km mark at Veverska Bityska we decided to start looking for a camping spot – and lo and behold there was one a few kilometres away, which was really nice – this time full of mainly Dutch camper vans! Pitched our tent, got settled and apart from our stove throwing a bit of a hissy fit, we had a lovely evening chilling in the sunshine with our fellow campers.  Doing this has made me realise much I have missed camping over the last few weeks, which is a revelation to me because until this trip I haven’t camped much.  But to be honest when the weather is cold and wet it’s not my preferred choice of accommodation, which is why we haven’t done much lately.  But hopefully that will all change and I can get back to being the rough outdoors type that I never knew until now was lurking inside me!

Left the campsite in the sunshine – the good weather is definitely back! Tough hills for most of the day, but again amazing scenery.  We had a morning stop in a pretty little town called Rosice and then we were into the Moravian wine region…apparently…we didn’t see many vines to be honest – just very green, rural landscape.  Our end destination was a town called Znojmo, which we call “the Z place” because we had no idea how to pronounce it. Passed a stunning hillside castle in Moravsky Krumlov, one massive hill climb into the town and then we were in Znojmo; time to look for accommodation.  We literally tried the first Penzion we saw, which was a cute little wine shop with rooms above it – and we lucked in.  A fantastic little roof terrace overlooking the town gave us a lovely vantage point to see the area – and the distant Austrian border about 8km away. 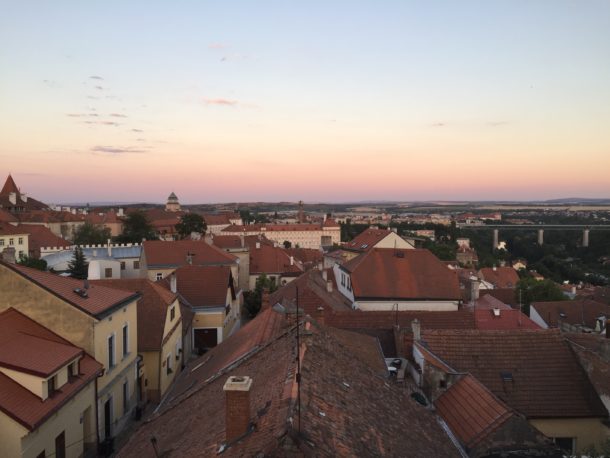 When we went out at 6pm for dinner, the town was very deserted (Monday around the world is generally like this) but by luck more than judgement we managed to find the one place that had a few people in it – a brewery.  Food wasn’t up to much, but we were starving so it filled the gap. I decided to try a sweet dumping for desert which after my stew and dumpling experience on day one made me a bit wary….but yes, it was GOOD.  What they lack on the cake front they make up for in sweet dumplings…plum, with a bit of rum and lots of vanilla custard….and it’s taken me this long to discover this! Piggy little me was quite content for the evening! 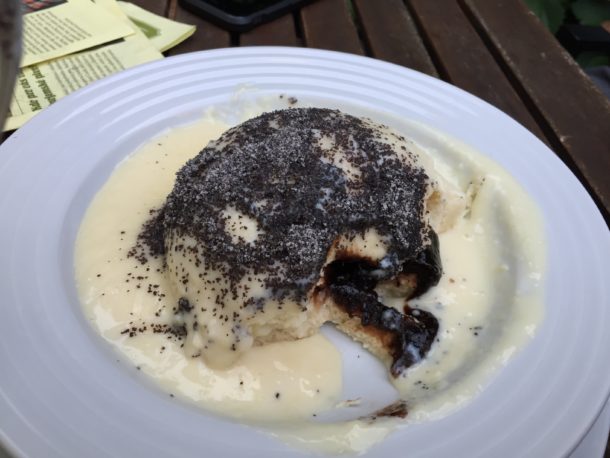 A day off in the “Z place”, which we now know is pronounced as “Znoymo”, and it started with buffet breakfast, which was a treat and a deviation from our usual bowl of museli and a roll with peanut butter. Interestingly a bottle of white wine was  part of the buffet….!

Znojmo is a walled town in the centre of a well-known wine region so we headed for the walls and were met with the most amazing views into a river valley. 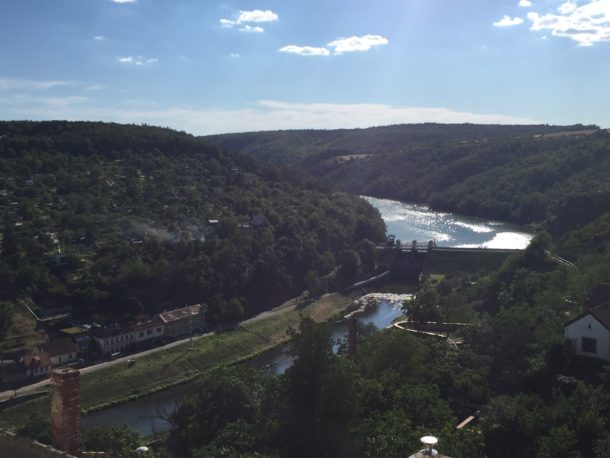 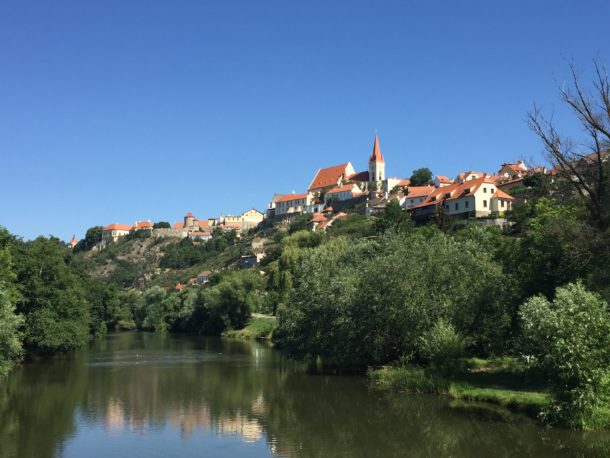 Walked a river loop back into town and wandered through the narrow cobbled streets, which had some people around, but not heaving like you would expect in the Mediterranean at this time of the year.  One of the big tourist attractions here is the network of underground passages below the streets that date back to the 14th   century. At 30km they are one of the largest subterranean labyrinths in Central Europe and were used for the residents of the town to hide in times of war.  An interesting tour before lunch  – followed by the obligatory afternoon snooze.

We couldn’t see anywhere we liked the look of for dinner so we decided to utilise the cooking facilities in our lodgings and have dinner on the terrace in the sunshine – but not before the pre-dinner drinks at the Rotunda viewpoint overlooking the valley.

It took us a few days to warm to the Czech Republic, but the last week has been absolutely fantastic.  Aside from the hospitality sector and the food, neither of which have impressed us, the cycling and the scenery have been amazing.

Next we head into Austria on our way to Vienna for 4 nights and then a 3 night stay in Bratislava….on the hunt for a barber for Nigel and a hairdresser for me…our biggest challenge yet I reckon!