Passed the 5000km mark in the stunning Czech hills 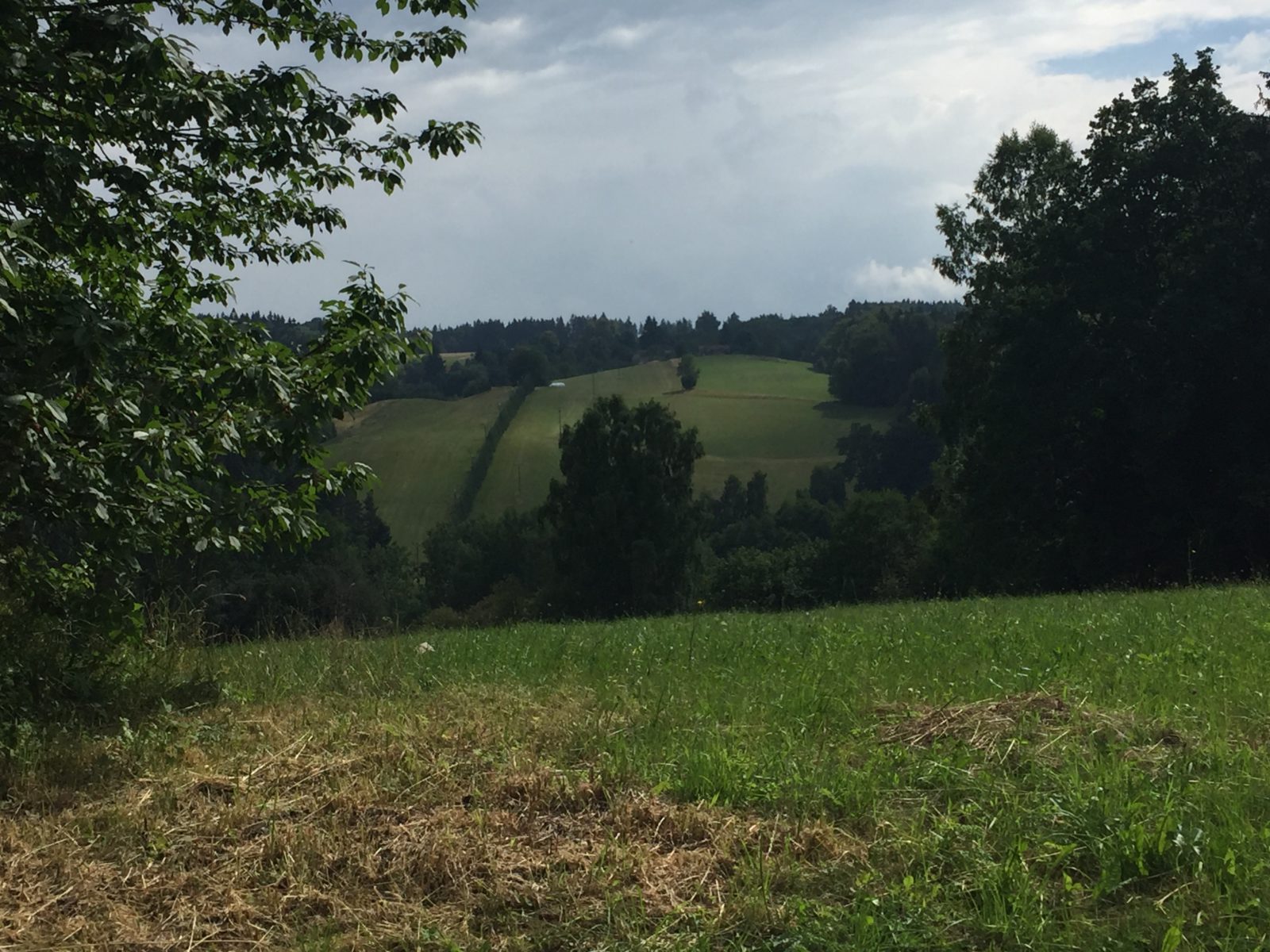 So after our visit to St Barbara’s cathedral it was home for an afternoon snooze – the luxury of a day off!  Dinner was a wander into town for a pizza and on our return our hosts had left us a basket of fresh apricots from the tree outside our flat – More food for us to scoff! An early night and we were up and out on the road again at 9am, heading towards Resov Falls in the mountains, which we hope to make in 3 days.

While Ireland and the UK enjoy a heatwave, our weather forecast wasn’t great, but the sun was shining when we left, which always makes for a happy start. Really lovely first few hours of cycling and within the first hour we had arrived in a lovely little town called Caslav – very pretty, lots going on and a couple of nice-looking cafes.  Unfortunately we weren’t ready for a coffee break so we kept going, travelling through wheat and corn fields and relatively quiet roads. 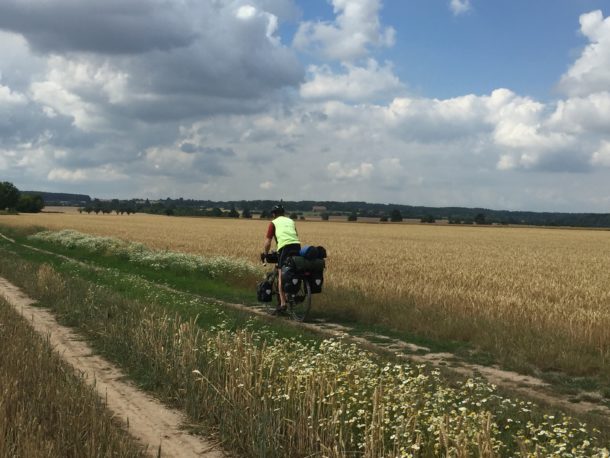 We were obviously near an Air Force base as there was lots of fast jet activity going on – but we only managed to get sight of 2 jets (SAAB Gripens), despite hearing them for hours – but we also saw some deer bounding through the fields as well.

Our route took us through the Iron Mountains and a national park which was very lush, but there were some proper steep hills that went on for quite a while. 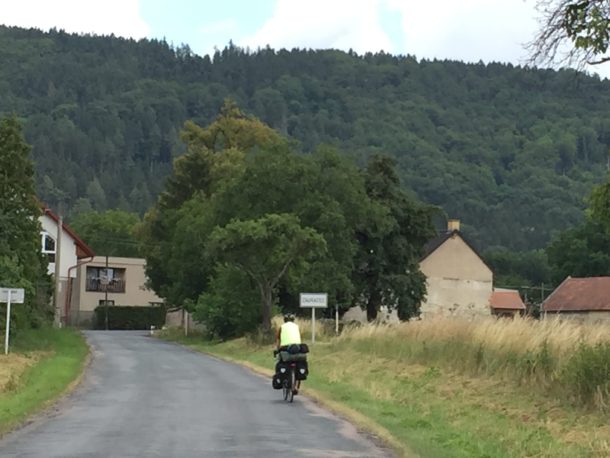 We are bit out of practice on hills as it’s been a while since we had some, but we managed them quite well considering this – with minimal huffing and puffing from me!

Half way up one of these hills, the sky that had looked threatening for a while decided to deliver on its threat and the heavens opened…thankfully just a few minutes from a bus stop, where we took refuge for about 20 minutes until it passed – using the time to take in the view of the nearby Lichnice Castle ruins and change into our wet gear…from now on to be known as our “sweat gear” as the humidity made it really sweaty and uncomfortable for the next few hours as we continued to climb forested hills in the rain.

After a lunch at the side of a road, we decided to take the chance that it would stay dry for a while, and took our sweat gear off, for me to discover I had been wearing my trousers the wrong way around and wondering why everything felt tighter than normal! But the reprieve was short-lived and the sweat gear was back on for at least another couple of hours until the sun reappeared properly. But the cycling route through part of the Zeleznehory National Park, a village called Sec and a dam in Zehuby, made up for it. 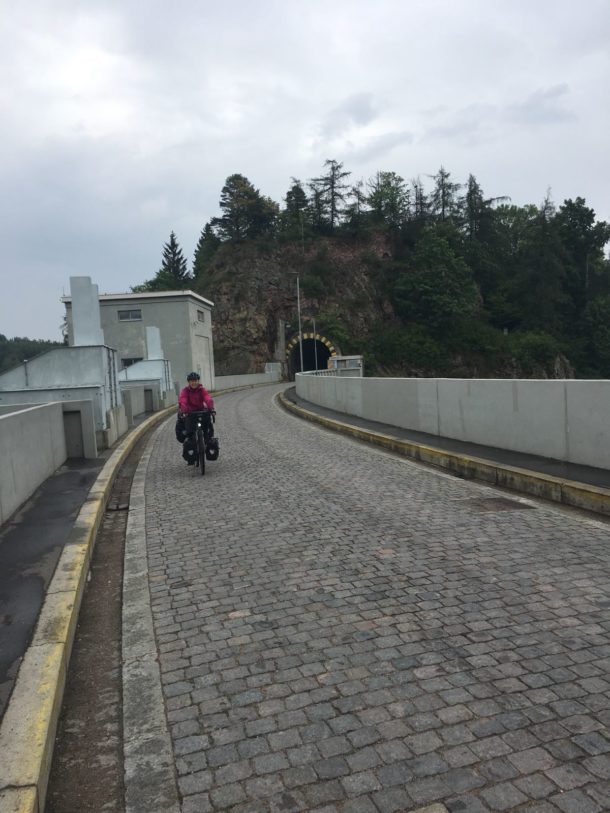 I have been slower than usual today and realise I am a bit tired so at the 65km mark, we had reached a town called Hlinsko, so we made the  executive decision to call it a day – especially as it looked like another downpour was imminent.  The one word we have learned in Czech is ”ubytovani”, which means accommodation – and we have eyes like hawks to spot it wherever we go.  On our way through the town we spotted the Ubytovani sign on a nice townhouse so enquired if they had a room…thankfully the landlady spoke some German and was very  friendly and accommodating (it’s in the name!)  so within minutes we were in our room, complete with a kitchen unit and washing machine! And with a supermarket 400m round the corner, what more did we need?! A home-cooked dinner, beer, football, clothes washed and an early night, while we listened to the torrential rain outside.  Glad we didn’t choose tonight to get back to camping! 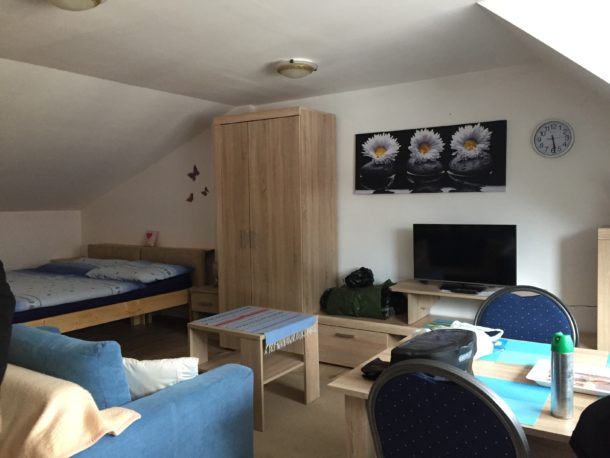 Set off today a little bit apprehensive as planning a route off the main roads had been a challenge,  similar to how is was in Sweden – except here we have hills to add into the mix.  But it wasn’t as bad as feared and it was a pleasant cycle through rolling hills with some sunshine, which hadn’t been forecast. Unexpectedly came across a lovely town called Litomysl around 12.30, which is unusual for us to time it so well to find somewhere we like when it’s time to eat! 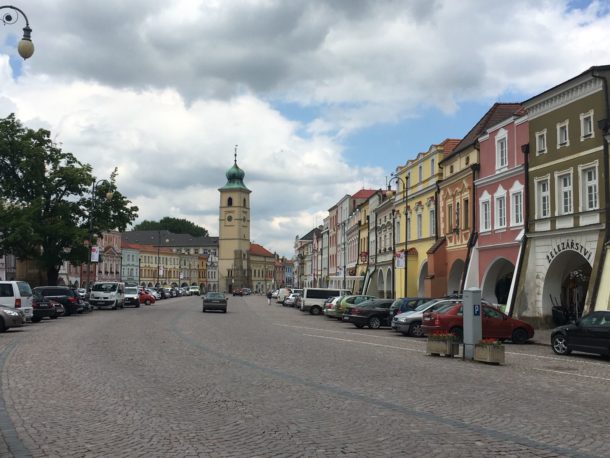 Wandered around to look for a lunch venue, and there was plenty of people and a great atmosphere in the town – in fact a lot more here than in Kutná Hora, and they are obviously used to tourists as lots of the menus were in English.  As we were deciding where to eat, a couple stopped to tell us that the local tourist office had a place to store bikes for free and to have a shower…says a lot about what they thought of our hygiene..but personally I’m blaming Nigel for the wooly mammoth look!  Anyway, we asked him about lunch recommendations and he directed us to a 4* hotel that does a reasonably-priced lunch (Which by our standards means dirt cheap!). Not sure how we would be accepted looking like the vagrants that we are, we decided to brave it.  The staff were really friendly and didn’t bat an eyelid at our bikes or attire.  There was one free table in the outside garden and we had the best lunch of our trip so far..Nigel had linguine with parma ham and I had chicken “Gordon Blue” (which I was pleased to say looked like chicken cordon bleu when it arrived!) and Nigel would even go as far to say that it was one of his best meals ever – and at a ridiculously cheap price. The hospitality of The Czech Republic is well on the way to redeeming itself!!  Had we had a few more kilometres under our belts at this stage we would have been tempted to put down roots for the night, but it was only lunchtime and we have the Resov Falls on our radar.  So we got back on the bikes, passing a lovely big church… 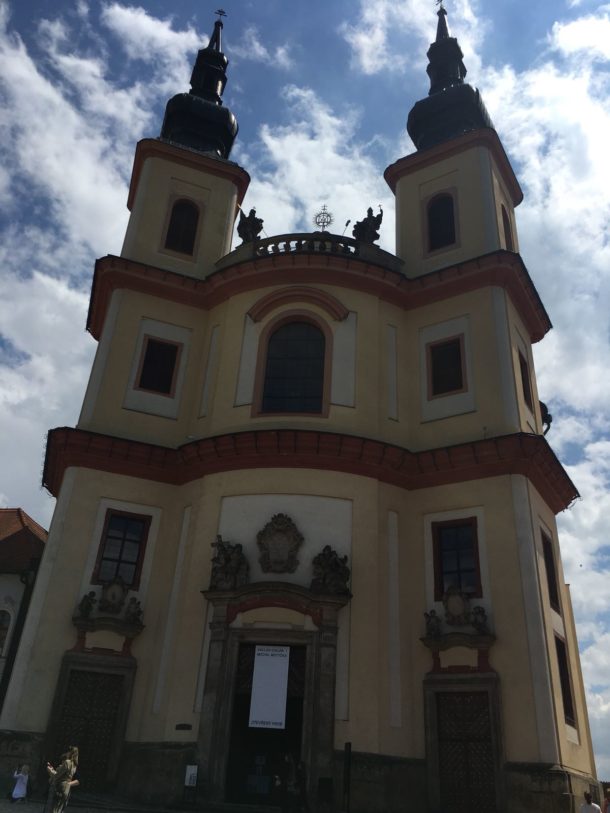 …and cycled for what turned out to be a tough afternoon in the hills.  One massive hill that I can’t say was enjoyable, but the rest of it was quite steady climbing and nothing like we had experienced in Norway so it was more than manageable.  You know you are in the mountains when you cycle through a ski resort…! We stopped for desert along the route – some wild strawberries which were in abundant supply!

Just as the weather changed and the first drops of rain started we reached our target destination of Lanskroun for the day.  We have decided to be more chilled out about booking accommodation in advance and putting ourselves under pressure to get somewhere, so with the rain just starting we spotted a bakery with a coffee shop, so it was time for tea and cake to make a plan! Headed to a couple of Pension houses to find they were full – including one called Pension Martina which was a shame! A bit of googling and on our way to one we spotted the Ubytovani sign and as before made enquiries.  No English or German common language so lots of hand gestures and smiles and we were in – and then it was a bit too late to back out! Not quite as lucky as last night…it felt more like a doss house or half-way house for people being rehabilitated back into society…our room had 5 beds and we had a panic moment of thinking “Oh sh*t – who are the 3 others we are sharing with??” When the landlady suggested we take our bikes into the room with us….which we normally have to ask…it did make us wonder who the other residents are.  And when a car drove by the window, the volume on the old-school, late-90s, TV decreased dramatically. Anyway, we think it’s hilarious and will dine out on this for years, if we are not murdered in our beds tonight!  But the landlord and landlady are lovely – and even came to deliver some posh toilet roll for us to use – not that horrible scratchy stuff that was standard issue!  Seriously through it’s a roof over our heads while it’s raining outside and it’s only for one night, so we are grateful. And it’s one of the quirks of travelling…you just never know where you will end up – and am sure it won’t be the first of its kind. 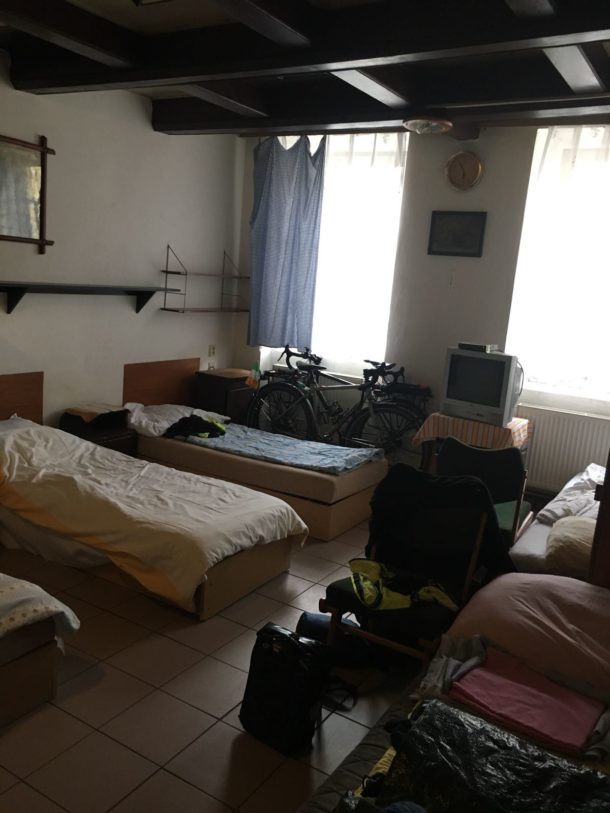 Slept surprisingly well and woke to a quiet house.  This surprised us and made us wonder if it actually is a type of rehabilitation house, rather than a boarding house for workers – which, honestly made us feel quite sad for the people who lived there….but not sad enough to stay to find out.  So off we went for our final climb into the hills.  The journey was to be in 3 parts – a hilly-ish start, a fairly flat 20km and then a monster finale to take us to our very rural accommodation, a few km from the Resov waterfall. Despite our decision to wing it more when it comes to accommodation, because this is so rural we didn’t want to take the chance with this and had booked it earlier in the week. The first part of the day was as expected on the hill front through stunning countryside. 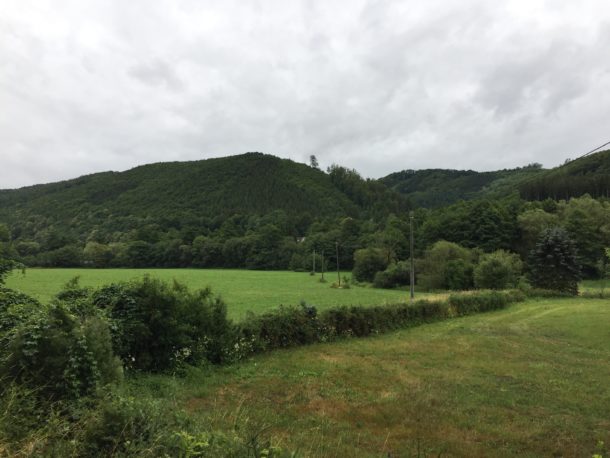 A detour added a few unexpected kilometres on the flatter part of the route, but we didn’t mind too much as it took us along a route with lots of cherry trees that were loaded with ripe fruit, so we stopped and sampled (With serious faces obviously!). 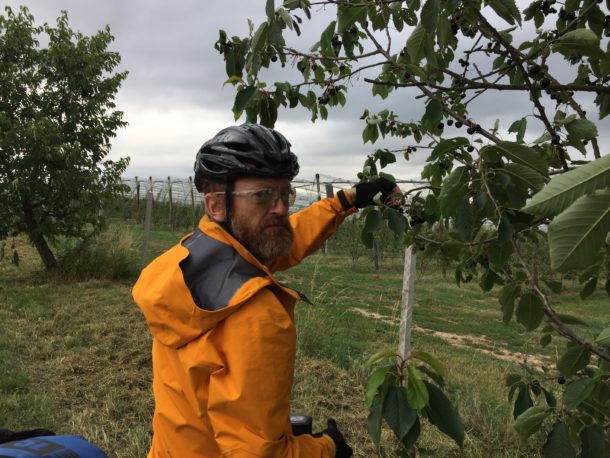 We also played “Spot the Skoda” as a distraction from the strong headwind that we had to battle, but that got a bit boring as nearly all the cars are Skodas – easily 80% – so it wasn’t much of a challenge!

When we stopped for a sandwich lunch in the square of pretty town called Unicov, we spotted a local map of the area, so decided to take stock of where we were….and it’s a good job we did!  Our accommodation was in a different place that we had originally thought – but to our advantage; only 15km away on a route that wasn’t as steep as we had expected.  Horrah!! Off we went with a spring in our pedalling and although the last 5km was a pure uphill grind, we made it to base at 3.30pm.  A fantastic room overlooking miles of stunning scenery above an Italian restaurant – and a short walk to the falls.

As as a side note we have now passed our 5000km mark of the trip, 13 weeks in – so some maintenance needed on the bikes.  But both very happy to have reached this point of the journey and in such a lovely part of the world.