Kielce is worth a visit – as well as being an “agri” tourist! 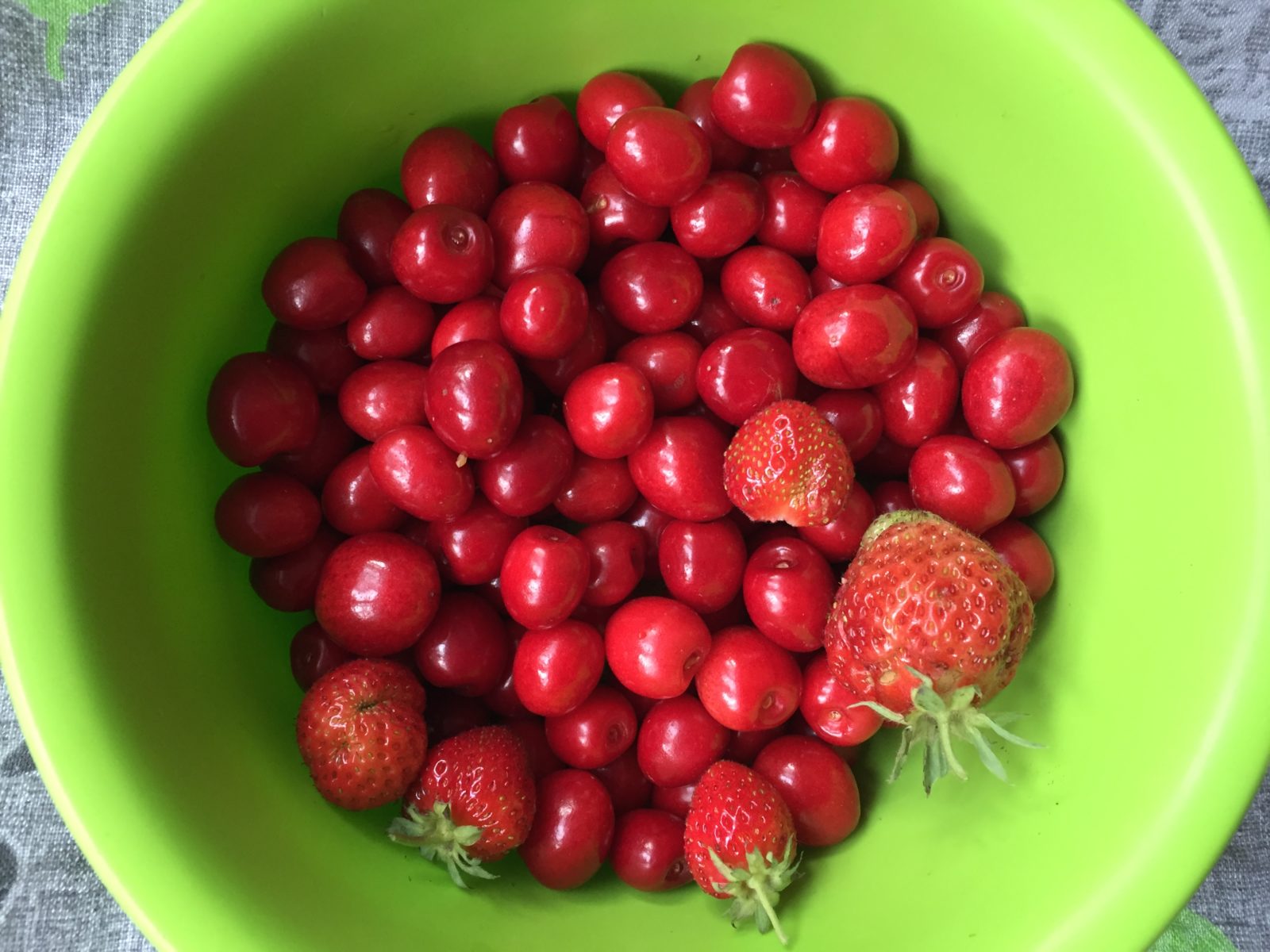 So, the dodgy geezers didn’t appear overnight.  However a tractor passed our tent at about 5:30am – not once, but three times- just to make sure that we were awake! It’s amazing, we couldn’t imagine that anyone would come past us as we were 100m up a forest track, out of sight of the road etc. There was signs of fly tipping near our camp (but not near enough to put us off staying) so I suppose we shouldn’t have been too shocked. The moral of the story is that they didn’t appear to give a stuff that we were there and actually it was in our heads that someone might turn up and tell us to poke off!

After a couple of ‘coolish’ days we are back to proper hot again.  It was 29 degrees today, plus the humidity has definitely gone up high which makes for hot and sweaty cycling….nice! No one appeared whilst we were packing up, so off we headed into Konskie in search of fresh supplies and a coffee. On the first point we had no problem and found a Tesco! According to Martina it was similar to the UK experience and actually better than most of the other supermarkets she’s been in over here – I tend to look after the bikes whilst Martina is in shopping. Oh, the supermarket car parks I can tell you about…!

The central square in Konskie is very nice and obviously the meeting point for all the local old men and we found a takeaway coffee and a cake each.  Coffee and cafe culture has definitely not come to Poland.  They substitute ice cream for coffee in that they will eat an ice cream in what looks very much like a coffee shop. They will, of course, also have a takeaway ice cream and eat it either as they are walking or in the local park/square in the same way as we might have a coffee – but a coffee in the sunshine with or without a cake, just doesn’t happen bizarrely.

Fuelled up with cake we were off, continuing our journey south and went through some fairly unremarkable farming countryside. However we encountered proper hills for the first time in a while. Nothing too hard, well I say that, there was a fair amount of grunting coming from the bike behind me at times and a comment of “was it me or was that harder than before”? Actually the hills have been nice as it’s been pretty flat to rolling since we got to Poland, so this has been a nice change. We were caught up by a lovely Polish couple, Ola and Arek who are on day one of a ten day cycle from Konskie to Lublin, their home town. We had a lovely chat with them for about 10 minutes before our paths took separate ways. Obviously they weren’t as loaded up as us, which is how they caught us up… 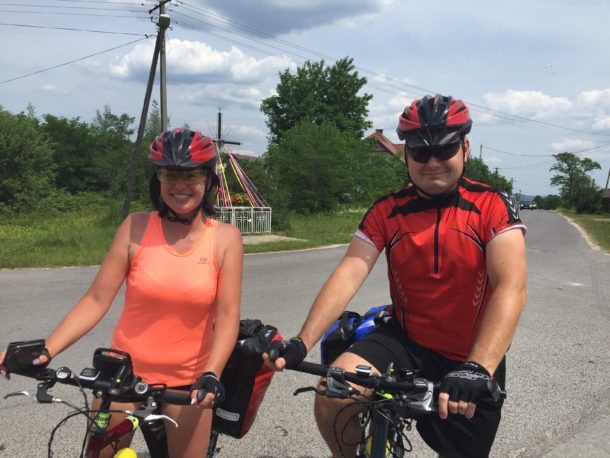 As with other decisions we just randomly decided to go into Kielce, a large town nearby, before heading further south to a campsite. The cycle into the town was pretty emotional to say the least, really main roads and at one point we were on an A road between two motorways.  This is not bike territory and not comfortable for us, but there was no other way into town from that direction. The only saving grace was that it’s Saturday and the roads were quiet-ish. Suffice it to say that for about 30 minutes we were not particularly happy! Still, we carried on through the confusing outer streets and finally got the the centre, very hot, very sweaty and slightly euphoric that we’d survived the main roads!

The outskirts of town didn’t give us a good feeling about what we would find, so we were rather pleasantly surprised when we found that the centre of town is really nice and that there was an event on with live music in the main square.

When we arrived there were a bunch of fiddle players on stage doing their thing, and very good they were too. We had a wander around and then, what to do next? We’d earmarked a campsite for the night about 20km south, but the centre of town made us re-think our plans. We don’t need to be in Kraków until Monday so we have time to spare, so decided to book into a hotel in the centre and have a Saturday night out – am sure we’ll still be in bed by 10!

We had a great night in the centre, watching a Polish regional squash championship being played in a glass box in the middle of the main square. The food and drink in the cafe we chose was great and unbelievable value, so all in all we were very happy cyclists. It was a bit humid and sticky overnight, so not the best night’s sleep, but that was more than made up by the enormous breakfast we then consumed in our hotel before going for a wander around town. It’s a lovely town with a good vibe and on this sleepy Sunday morning we thoroughly enjoyed our saunter around the mainly deserted streets. Kielce is accessible from Warsaw and Kraków and we reckon it’s definitely worth a visit as it’s not touristy, really nice,  great value and we enjoyed it much more than Łódź – OK sales pitch over! 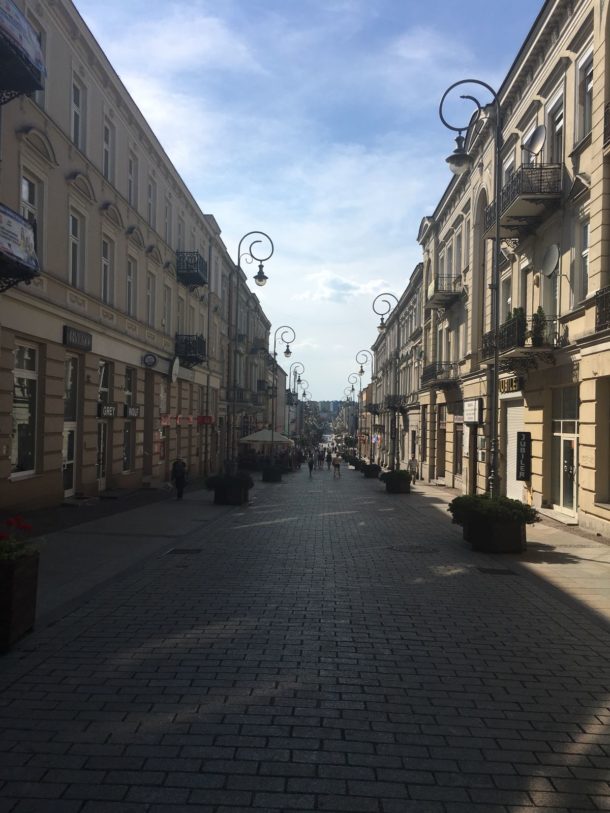 Back out on the road and it was hot and sticky again – forecast for 31 degrees later on in the day. The road out of town wasn’t the best, but not unpleasant, and we encountered a few more hills mainly consisting of sloping ridges that we had to get over – but again nothing too strenuous. 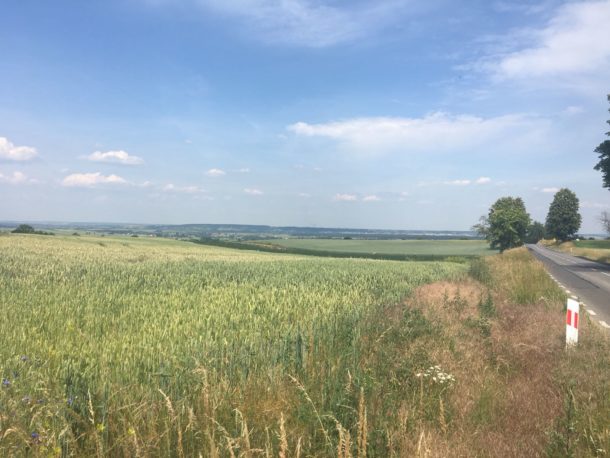 We saw some small brush fires at the side of a set of railway tracks – the area has been so unusually dry recently that there has been warnings on the telly about fires all over Poland, but this is the first one we have see.   We stopped in Pinczow for a snack and noticed a cafe across the street and decided to take the plunge! With the help of Google translate, charades and guesswork we ordered the menu of the day, which was tripe soup and a main course of fish. We were most definitely a bit apprehensive with what might turn up, but the tripe soup was surprisingly good and we’d even go so far as to order it again if it was on a menu, and the breaded baked fish, spuds and salad that came as a main was fantastic. We wouldn’t normally put prices in the blog, but basically it was the equivalent of £3 per meal each and we got a bottle of water to wash it all down…amazing!

We continued south for another 2.5 hours over rolling country and then the question of where to stay. We had planned on rough camping, but whilst we were sitting in the square in Dzialoszyce we did a search and found agri-tourist accommodation nearby. We’d heard of this and seen a few signs over the past week or so and gave them a call and they had availability. Basically it’s room in a house in a rural location, often a farm. They wouldn’t be home for a couple of hours so we sat in the square to pass the time. Dzialoszyce is a very small town and we thought nothing more of it until we decided to look it up on Google and found it actually has an interesting history as a stop on a trade route. It used to have a much bigger population but all the Jews were rounded up in the last war, never to return and the town has never recovered, very sad. This might explain some of the strange people (many drunk) also lurking in the square with us.

We found the agri-tourism house “Zascianek”and the very welcoming Dorota, Kasia and Zygmunt.  Kasia lives and works in Scunthorpe in the UK so speaks perfect English, which made life very easy for us!  After settling in we went into the garden to pick cherrys off their tree for our dinner, all very Enid Blyton, but very delicious. 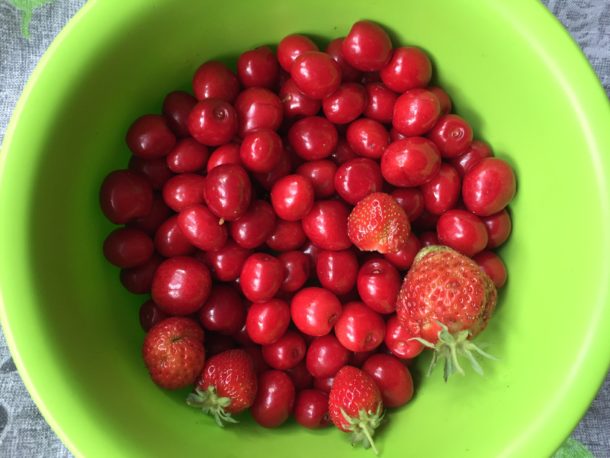 Something I forgot to mention in my last blog post was that we finished our first bottle of factor 50+ of our journey. Don’t worry, I won’t mention each suncream highlight, but thought that this was worthy of a mention as we had no idea that it would happen so early …basically because of the good weather we’ve been slapping it on since the Netherlands!

One other point from the last blog reference the mozzie attack in the forest, Martina’s bites have come up pretty bad, especially on her left arm. They also chomped on her through her Lycra top and shorts, which just isn’t cricket! Not making fun of it as they’re not nice and the bites hang around for ages.

Equipment update – here is a bit more info on our sleeping arrangements! A couple of things we have been impressed with on the camping front.

We have both got Mountain Equipment Helium 3 season sleeping bags and apart from one night in Norway we have been toasty warm with them. They are light and they pack down to an amazingly small size, which is a bargain as far as weight and space-strapped cyclists are concerned. We also have a sleeping bag liner which gives a few more degrees of warmth, but more importantly keeps the main bag clean as we can wash the liner when we like. We make a pillow out of clothes and have bought a pillowcase each to put them in – we can wash this when we like and it keeps the head area of the main bag as clean as possible. We are using Thermarest sleeping mats; if you have never heard of them and think that sleeping outdoors is uncomfortable, then try one. They pack down really small, are fairly light and when blown up are about 3cm thick, but feel so much more than that! I’ve used them before and swear by them, but even Martina is impressed. Finally for this section, the tent is a 2-person Terra Nova Quasar – it’s really easy to put up and takes us less than 10 minutes. We’ve been really particular about looking after it (drying it properly) as it has been used so much and I’ve had it a while now. So far I’d say it’s served us well though we haven’t tested it in really bad rain yet, so it will be interesting (to say the least) to see how the seams cope. Though we’re looking after it it is still being put into and taken out of a bag nearly every day and that in itself will take its toll!