Glamping in a sauna, ice hockey, Vikings and herring 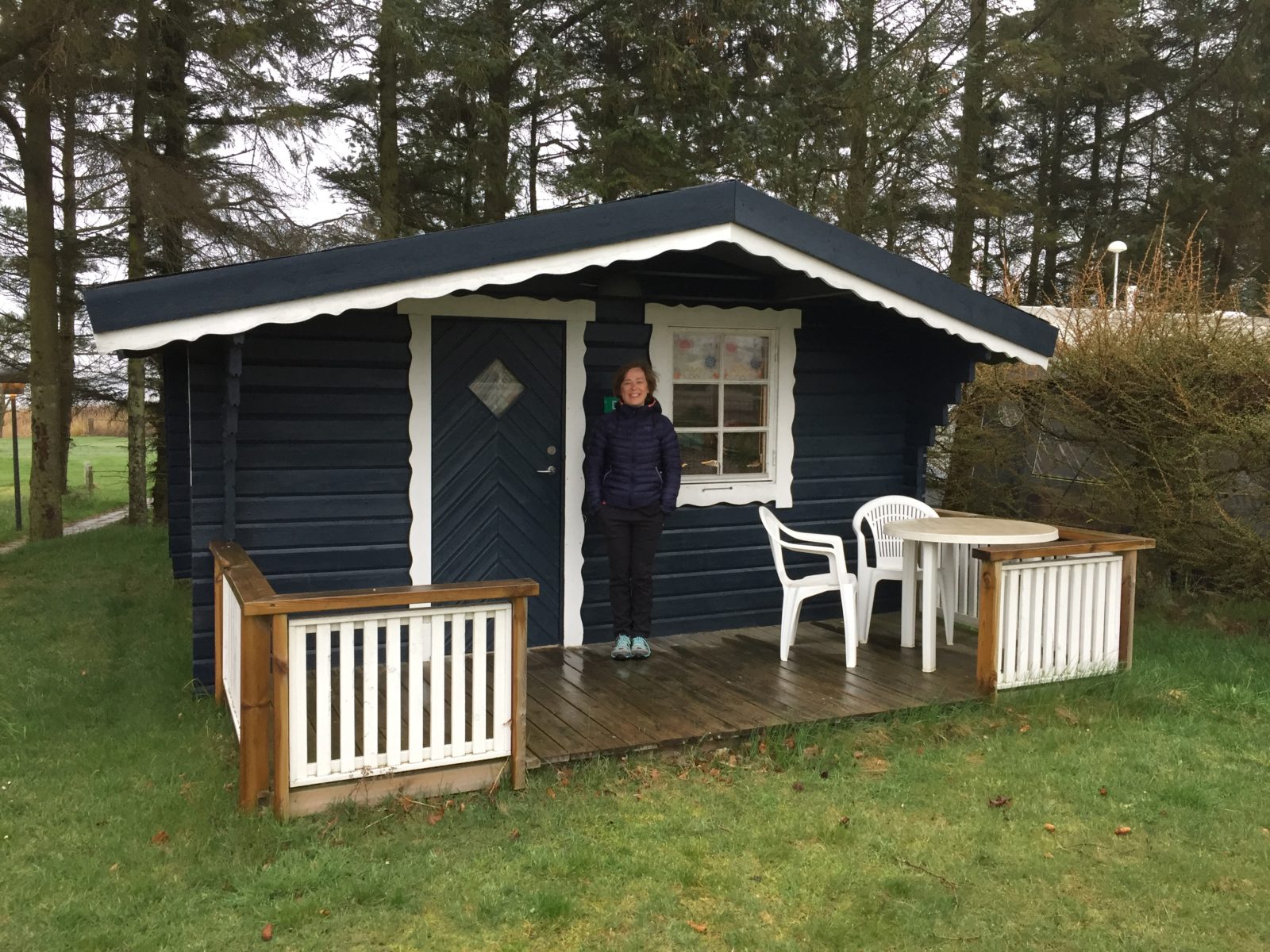 Departed base a bit later than our usual starts and had a short ride to our first ferry of the day to take us to the small island of Mors.  We were the only people on the Naessund ferry and the very helpful ferryman spent the 15-minute journey telling us about the island and what to do and see there. One nice touch were the numerous basic shelters ie sheds, dotted around the island for anyone to use to sleep in. Had we known this and planned to stop here, we would undoubtedly stayed in one. 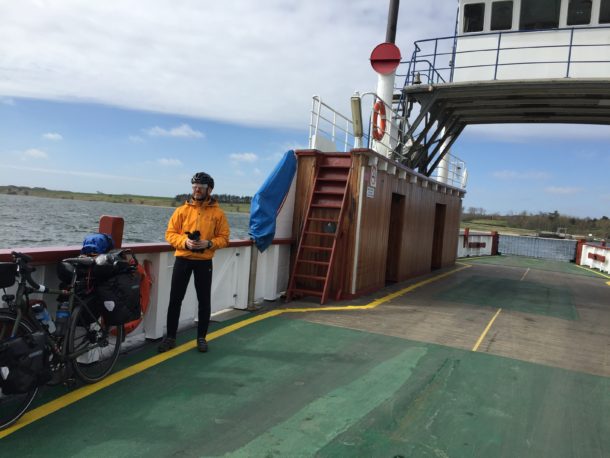 We didn’t have the heart to tell him that we were only passing through..the island is about 25km wide so we cycled across it, through some remote but lovely lush farmland with lake views on both sides at the same time.

Got to the “capital”of Nykobing in time for a late lunch of steak and burger…decided we need a good protein hit to fuel our muscles. 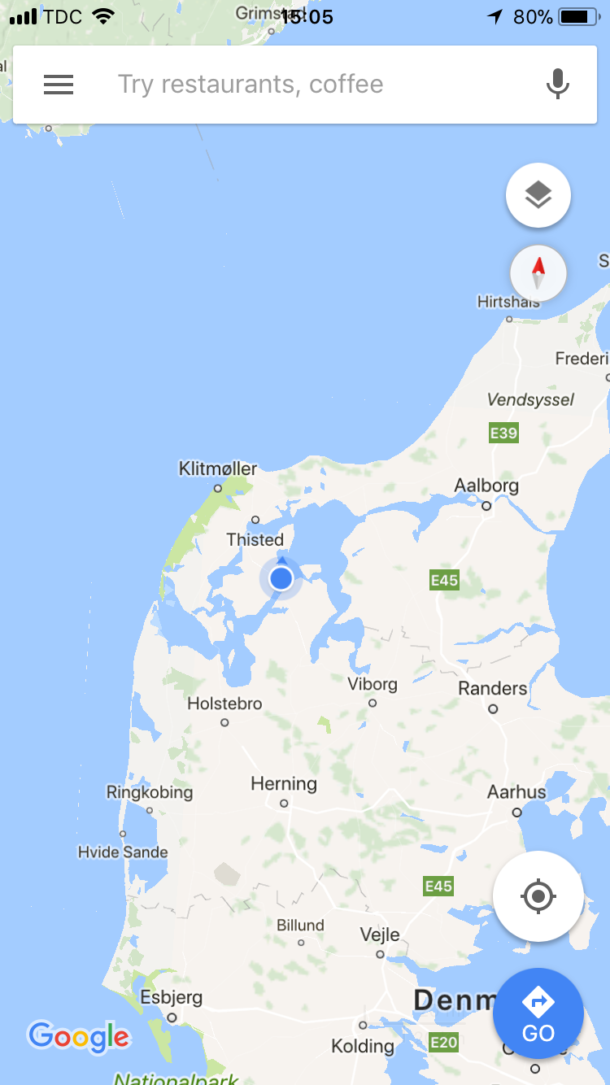 The town was cute, but small and sleepy, so we ventured on – and the exit route from the island was a bridge crossing with a very busy road – thankfully with a designated bike lane. Once over the bridge and off the island we decided to follow the wind to make it easier for us, and this brought us on a coastal route – no towns to go through, only clusters of houses which was pretty bland.  Spotted a supermarket in one of these little towns called Selde and on stopping to pick up the usual evening supplies of beer and crisps, lo and behold the Irish flag on my bike was spotted as a talking point by a local farmer (we assumed farmer!) who told us he had been to Ireland “all over”.  When I asked where he had visited his response was still “all over”…hmmmmm.  Anyway, onwards to the campsite we had in mind for cabin accommodation as weather was forecast to be rubbish – and another potential disaster awaited us. The site was closed and the owners were away for the night when we rang, so panic stations set in and we had a furious 9km cycle into a headwind to the next ferry.  We could see it coming across the water and we thought that as it was 6.30pm it was likely to be the last one of the day.  My little old legs couldn’t keep up with Nigel, who told me afterward he was both willing me on under us breath and swearing at the same time…but phew my legs didn’t let me down and we got there – and it wasn’t even the last ferry!! But second ferry of the day and 5km at the other side and we were home and dry – literally….our cabin smelled like a sauna,  but we didn’t care a bit. Actually it felt very authentic scadinavian – complete with IKEA bunk beds! 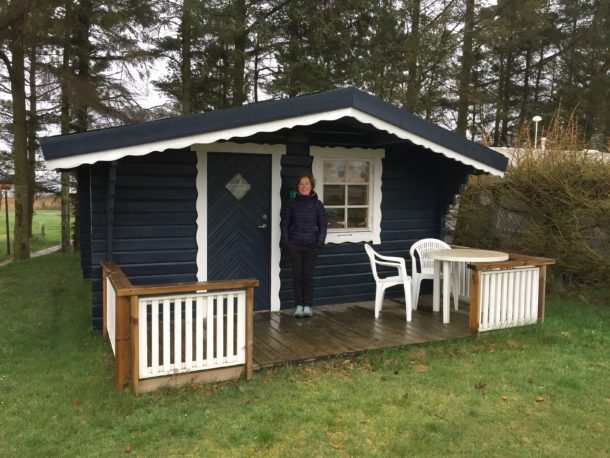 Another lazy-ish start on Tuesday to wait for the rain to pass. For the first 90 minutes we battled a  heavy crosswind to a place called Trend which wasn’t very trendy at all…It was another one of these hygge places – all cutsie houses and nothing else. But it meant we could change direction and go inland a bit and go northeast so we had the wind behind us.  Despite it being a grey old day, the remote country scenery was lovely and from countryside we went back onto coastal landscape.  Nigel disagrees with me on this, but it reminded me of home – northwest of Ireland.  Wild and remote but with amazing fjord views – and the type of place where you can imagine artists and writers live to get away from it all. We even passed a wind surfer…when I was struggling to keep my bike upright. 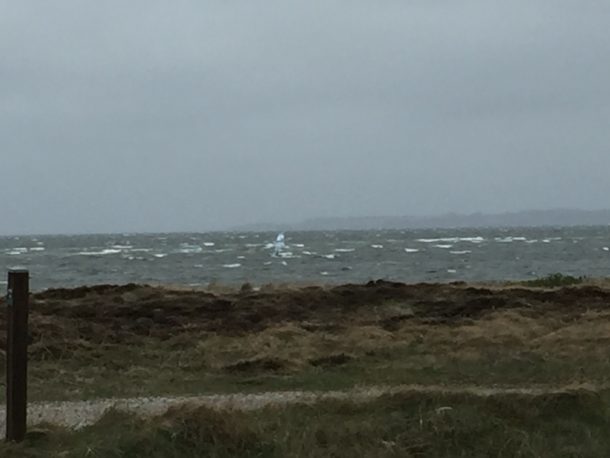 Reached base camp at Nibe early  after a relatively short day of 60km, so we had time to visit the local town, about a mile away  – which is probably like most villages all over the world on a grey Tuesday afternoon …dull! No pub or restaurant with people in them, so we opted for home cooking. Mind you it was the only place in Denmark where we have managed to find jam in a plastic squeezy container…honestly, it’s the simple things that make a big difference when you are camping!!

Next stop Aalborg where we have taken a few days out to chill to enjoy our last few days in Denmark. Aalborg is a lovely place with lovely old town that has been rejuvenated over the past few years.  We warmed to it on arrival. Wandering around on day 1 we came across the local ice hockey team Aalborg Pirates outside the town hall who were celebrating winning their national ice hockey league. 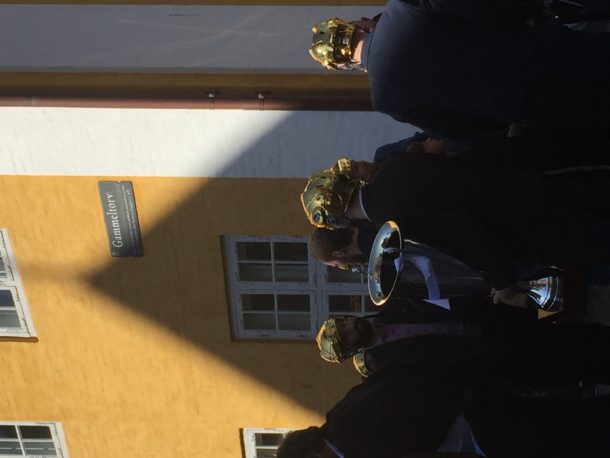 We then had a great evening in a local brewery – run by a dour Scot – but the beer and food were great.  Day 2 we had an fantastic trip to an old Viking site and burial grounds at Lindholm Hoje across the Limfjord.  For a day off we still managed to walk over 10km! 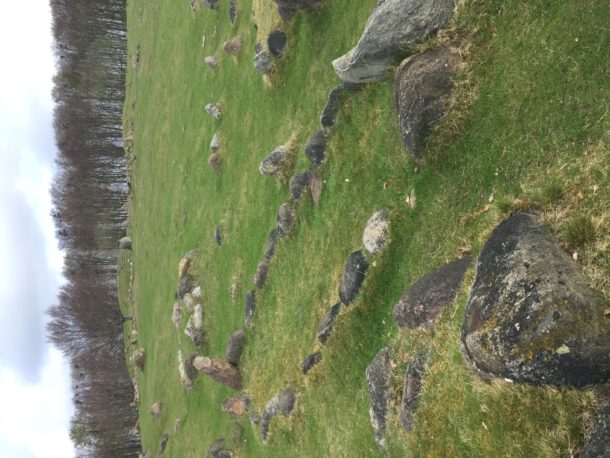 ..and had our best meal in Denmark so far of herring, smoked eel and fried fish. Real Danish fare apparently and it was fantastic 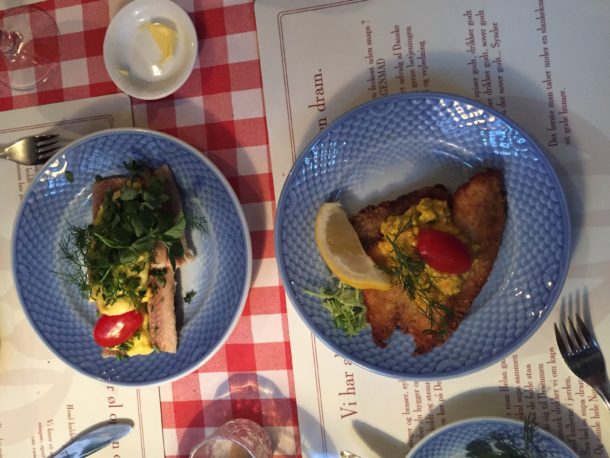 From Allborg we will cycle to Hirtshals to get the ferry to Stavanger, Norway for our country number 5 on our trip. We will do a Denmark round-up though before we launch into Norway.  Aalborg has also involved afternoon snoozing and more bread and pastries – photo attached this time as promised although I don’t think it does them justice really. One thing that has bothered us while we are here is “ What do the Danes call Danish pastries?…”our pastries”, “National pastries”, “home pastries”, “pastries”??? All answers in comments section please! 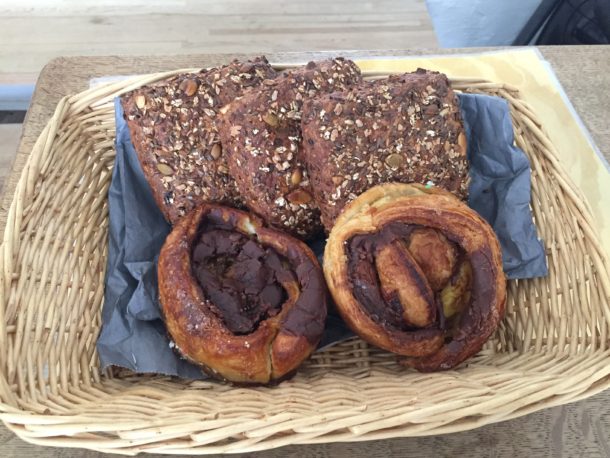 One final thing for this edition…As we have already mentioned we have to make regular stops to eat. All the countries, Denmark included, have provided excellent places for us to stop and you have seen the pictures to prove it. These are, of course, the best places and don’t necessarily tell the full story of all the other places we have stopped, for example next to industrial sites, two-lane dual carriageways, next to the bins behind supermarkets (out of the wind) etc. The pastries still taste good though, even when they are eaten beside bins….